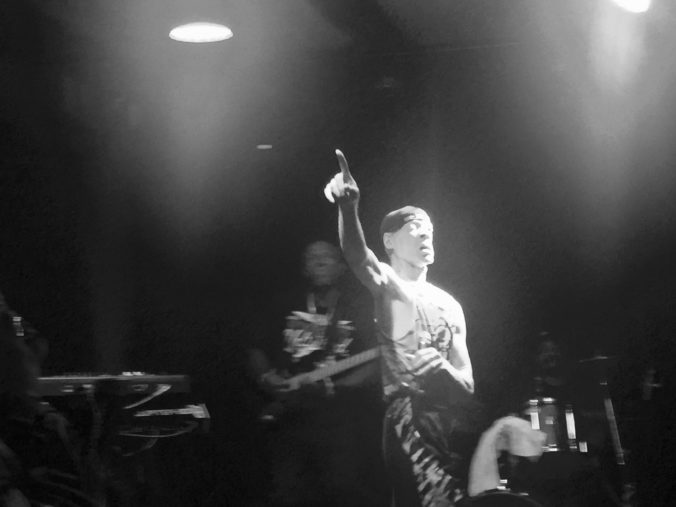 We got our first real snowfall last night. I live in a city that gets snow.  They tell me it’s the snowiest city in the whole country, but it doesn’t bother me most of the time.  I am not a fan of winter but in a town like this, we get something that my friends in warmer climates don’t get and there is no name for it, it’s a feeling and it’s hard to describe.

It’s the feeling you get when you are outside on a snowy cold day, the wind is blowing and  the streets are all slushy.  You have to watch your footing on sidewalks that can be slippery even after someone took the time to clear them.  The place you are going, it’s a small club, the windows are steamed.  The neon lights cast a glow that illuminates the falling snow.

Once inside, a look back through those windows shows you the cold and snow you just left behind and it makes the room more intimate.  The visual alone makes you feel warm inside.   It makes the people you speak to all the friendlier, this shared warmth does.  It makes the night more special that you are all for the next couple hours, cocooned inside this warm place for this shared experience.  As winter insinuates itself into the remaining days of autumn, you know the snow is coming and the first day it does, you know it wont stop you from finding that community, those positive vibrations.   The first night is special and sometimes it not a  night to sit inside, those nights will come and they bring with them warmth and safety too.  But some nights you have to put on the boots, go out into the cold and look for a different warmth, especially when there is greatness to be witnessed.

That was last night at Funk n Waffles in Syracuse.

In music, the world “legendary” is thrown around a lot.     If Yellowman is  not legendary, then nobody is.  Last night the legend was reaffirmed in Syracuse, on a night where the snow fell and warmth emanated from behind foggy windows in the center of the city.

I was lucky enough to get there in time to see the opener, Syracuse’s own Skunk City, a band I have not seen prior to last night and shame on me.  They played a set of Bob Marley classics to warm up the room and warm up they did with classics everyone knows, like The Heathen, Positive Vibrations, Jamming.  You know the catalog.  The rapidly filling dance floor in front of  the stage grooving easy to the reggae being laid down by a talented beyond words band.

Guest vocalist Jessica Brown, she of the beloved Root Shock, possesses the only voice who could step in and represent all three of the I-Threes at one time.  Not to mention deliver a scorching version of Kinky Reggae which was the set’s highlight.  I swear Robert Nesta Marley would have sat up in his grave to take notice. 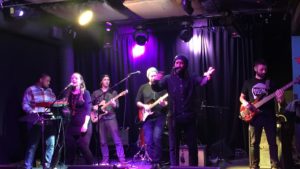 What I am noticing about Syracuse bands these days is a sense of positivity, a lack of ego and a genuine vibe of community.  Skunk City have that vibe.  Syracuse is a city which has decided in so many quarters to be positive about it’s future even in the face of poverty, crime and general economic malaise.  That has been the spirit of so much of the reggae I grew up on.  Jamaica isn’t all what the resorts and Red Stripe commercials tell you it is.  The reggae artists of Jamaica knew than and reflected that in their music.  It’s a beautiful riddim born of poverty, oppression, crime and injustice.

Maybe that’s why reggae seems to resonate so well in our city on the rise.   It can inspire optimism and  perseverance.

Nobody in music embodies optimism and perseverance more than Yellowman.

This guy was supposed to be dead at least twice already.

This guy has beaten back the cruel ostracization of being born in Jamaica with albinism.

This guy had knocked back cancer twice.

But here he is, playing that music, being the undisputed king of dancehall, hell, for my money he invented dancehall. Here he is touring the world.

A career that goes back decades and on a cold snowy night in central New York, Yellowman is  spreading positivity, humor and optimism and back to back dancehall classics.

This guy is 61 years old , been through what he’s been through and still rocking that stage looking every bit the bantam weight boxer, lean and mean in his tank top and shorts. A perpetual motion machine and the consummate showman, he shows no sign of slowing down.  With his likewise legendary Sagittarius band behind him delivering the goods on classics like Nobody Move, Nobody Get Hurt, Yellow Like Cheese, 2 to 6 Supermix, Operation Eradication and others.   The king asked for a moment of silence for the late great Fats Domino as he started his hit cover of Blueberry Hill. 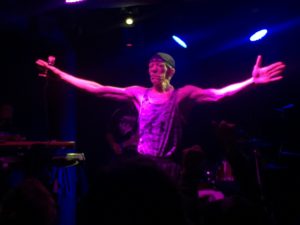 “I love you Syracuse”  he said multiple times during the 90 minute set.  The mostly filled (for most of the show) room loved him back.

When he left the stage,  he was greeted like the hero he is, with handshakes, hugs and fist bumps from all.

Honest to god it was reggae heaven and I have rarely seen so many smiling faces.

Heat is the sensation produced by the motion of atoms of matter.  The positive vibrations that were present  in Funk n Waffles last night created a heat that melted away the falling of our first real snow in Syracuse.  I remember thinking as I walked back to my car that it was surprising that there was no snow on my windshield to brush away.  I like to think that  those good vibes of unity did indeed melt that snow and ice. making it all easier to get back home.

I feel so lucky, so grateful that I was able to be there last  night.

Skunk City have a CD out this week and a CD release party at Funk Syracuse Wednesday night.

I’m not the most prolific blogger in the world.  I don’t even publish on a schedule.

I am working on that, but until l do, wouldn’t you like to just get notified when I update?

Maybe even get some extra ramblings?