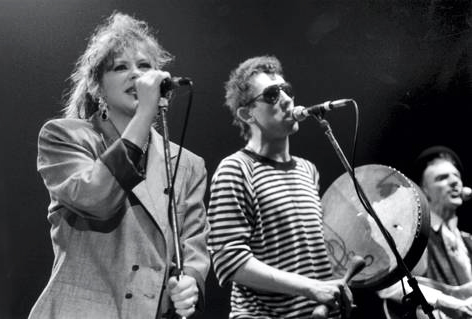 The Greatest Christmas Song (Or how Kirsty MacColl saved Christmas)

The kids love “Frosty the Snowman” and “Jingle Bells” and as a parent who is really a big kid, I love them too.

I’ve always liked the big choral works, you know when a huge choir sings, “Silent Night” or “Oh Come All Ye Faithful” a song I used to love to sing when I was in a children’s choir when I was a kid, before my voice changed and it all went bad.   Real bad.  Those choral works are stirring, they give you goose bumps. My voice these days would only give you a rash. Trust me.

Rock n roll has its share of nods to the winter holiday as well, The Waitresses “Christmas Wrapping” is one you just can’t avoid singing along to and was written by maybe the most interesting person I have ever heard of.   Chuck Berry’s “Run Run Rudolph” is a classic and you need to hear Dave Edmunds’ version.

The Christmas season is full of music, most of it is lovely, and hits all the right emotional notes, but the song I think is the greatest of all Christmas songs kinda sneaks up on you.  It hits all the same emotional notes as all the other classic  songs, bittersweet rather than sweet, and as one who loves words, there may be no better written Christmas song lyrics, more William Kennedy and Charles Bukowski than Irving Berlin. More Tom Waits than Bing Crosby.  A vivid, cinematic story, in four and a half minutes is “Fairytale of New York” by The Pogues featuring Kirsty MacColl

The song was written over the course of years really, and it was written on a dare from Elvis Costello who didn’t think the Pogues could write a Christmas song.   Pogues banjo player came up with the music and a first shot at lyrics that didn’t really work.  Singer Shane MacGowan wrote what would be ultimately be the brilliant lyrics, a simple conversation between a man and a woman whose life had not worked out as they would have hoped..

They took several shots at recording the song, with then bass player Cait O’Riordan singing (who did an highly under appreciated job singing “A Man You Don’t Meet Every Day” on the seminal Pogues album “Rum, Sodomy & The Lash”).  They tried to pull it off with Shane singing both sides, and with various female vocalists.  At one point Chrissie Hynde was suggested.

Nothing seemed quite right.  Until producer Steve Lillywhite’s wife, singer/songwriter Kirsty MacColl thought she would take a crack at it, and it was perfect.  Kirsty’s voice, and presence give the perfect mix of compassion and disappointment that the song requires.  I will admit to being a massive Kirsty MacColl fan but it’s obvious, Shane gave the song it’s pathos, but Kirsty gave it it’s heart.  She has all the most heartbreaking lyrics in the song after all.  After Kirtsy’s tragic death at age 41 in 2000, I had, and still have trouble getting through the song without getting choked up.

I’ve heard the song sung by a few different artists, and all are technically good at singing this song, but nobody can really do the song justice, and tell the story better than the original and that goes for versions I’ve heard by The Pogues themselves with other female singers taking Kirsty’s part. Like all the earlier attempts at properly recording this song, it’s just not quite right without her.

The Pogues and Kirsty MacColl each have an excellent body of work that is well worth delving into, but “Fairytale of New York” is the pinnacle for them both, a point well proven by the ubiquity of the song to this day, long after the Pogues called it quits and MacColl’s untimely passing.  I don’t think I’ve seen a music geek article on Christmas music this month that doesn’t mention it as among, if not the, best.

A uniquely American story told from the point of view of Irish immigrants who’ve come to New York for a life that didn’t work out as planned. A dialog between a man and a woman, who in the end, only have each other.

As excellent as the video for the song is, it’s almost too bad they did one, because if you  close your eyes and listen, you can paint the picture in your own mind better. You can feel the cold that whips through you, you can feel the cold slab to sleep on in the drunk tank, and most importantly, if you listen intently enough you can picture the characters eyes as they speak to each other in the song.

“It was Christmas Eve babe

In the drunk tank

An old man said to me, won’t see another one

And then he sang a song

I turned my face away

And dreamed about you.

Got on a lucky one

Came in eighteen to one

I’ve got a feeling

This year’s for me and you

I love you baby

I can see a better time

When all our dreams come true”

The fullness of the Pogues Irish music then takes over as he wistfully dreams about her, while he drifts off to sleep while locked in the drunk tank and promising better days to come. She remembers promises too, a life that he promised her, of a New York that the movies promised her, a city where dreams come true.

“They’ve got cars big as bars

They’ve got rivers of gold

But the wind goes right through you

It’s no place for the old

When you first took my hand

On a cold Christmas Eve

Broadway was waiting for me”

“You were handsome” She reminds him.

“You were pretty. Queen of New York City”  He tells her.

“When the band finished playing

They howled out for more

All the drunks they were singing

We kissed on a corner

Then danced through the night

The boys of the NYPD choir

And the bells were ringing out

Somewhere, it all fell apart.  She’s broken, addicted and heartbroken at her life, and he was never all that together in the first place.

“You’re an old slut on junk.  Lying there almost dead on a drip in that bed.” He claps back.

“You scumbag, you maggot

I pray God it’s our last”

A word about the language here.  The BBC had, in the past, attempted to censor this bit, and some reimaginers of the song changed the lyrics entirely.  In fact RTE, the Irish national broadcaster, as recently as this year has considered cutting some words in a radio friendly edit.

Shane MacGowan released a statement this year.   “The word was used by the character because it fitted with the way she would speak and with her character. She is not supposed to be a nice person, or even a wholesome person. She is a woman of a certain generation at a certain time in history and she is down on her luck and desperate. Her dialogue is as accurate as I could make it but she is not intended to offend! She is just supposed to be an authentic character and not all characters in songs and stories are angels or even decent and respectable, sometimes characters in songs and stories have to be evil or nasty in order to tell the story effectively. If people don’t understand that I was trying to accurately portray the character as authentically as possible, then I am absolutely fine with them bleeping the word, but I don’t want to get into an argument.”

It’s a mistake to get too hung up on the choice of words, because if you do, you’ll miss the swelling tin whistle leading the return of the chorus and you might miss getting the goosebumps I get when I hear it.

The couple, after such a rather explosive fight in their disappointment and despair, get reflective.

“I could have been someone” He tells her, in the voice of a man who has probably given up on his dreams.

“Well so could anyone!

You took my dreams from me

When I first found you”

“I kept them with me babe

I put them with my own

Can’t make it all alone

I’ve built my dreams around you” he tells her finally.

Honest to god, are there any more heartbreaking lyrics anywhere?

“The boys of the NYPD choir

And the bells are ringing out

And the world keeps turning.

The song ends with an instrumental reprise of the theme, which I guess is handy because I usually need that last minute of the song to wipe my dampened eyes and cheeks. In the video our lovers dance to the swelling Irish reprise in the falling snow. So yeah, pass me another Kleenex. It’s almost unfair the emotional pull the song has on my romantic, hopeful Irish heart

“Joy to the World” it aint.

Maybe the song is about the other song, “Galway Bay” a song about home for our couple, a song about longing for home, as their adventure in the new world sours and all their dreams crumble around them, leaving only each other.

In the end, each other is all we got.

“If you ever go across the sea to Ireland

Then maybe at the closing of your day

You can sit and watch the moon rise over Claddagh

And see the sun go down on Galway Bay”

Merry Christmas to all.