“I cannot stand and sing the anthem. I cannot salute the flag; I know that I am a black man in a white world.”

The racists in charge think YOU are an idiot.

None of it is true, they know it, but they expect you to buy the bullshit they are selling.     They are telling you that these African Americans are being “unpatriotic” and so many of you are falling for it.  Suckers once again.

If you think these protests are about ANY of that, then maybe you ARE as  feeble minded as they think you are, because they played you like a piano.

And as hard as it is for the toddler in chief to understand,  the protests are not about him either.

When Colin Kaepernick took a knee during the national anthem last year, he didn’t do it bring attention to himself.  He didn’t announce he was going to do it.  He didn’t do it while taking a defiant posture.  He did it quietly and he did it behind a line of his teammates.  He did it for,  I think,  at least a week before anyone even noticed or pointed a camera at him.  It was a quiet, peaceful statement of hope, of sorrow,  not defiance.  It was a prayer.  Hope that this “national” anthem that we inexplicably rise to sing prior to our sporting events will someday apply to him too and to people who look like him.

Listen, I have friends who are in law enforcement.   These are brave men and women who go our there, every day and part of the job they have is living with the concept that it is entirely possible that they will not come home that day.  These people have a tough job.  A job I would not want to do.  A high pressure job that can take a bad turn in an instant.

These folks are exemplary law enforcement personnel who serve their community with compassion.    My comments today are not an indictment of police as a whole in any way.   If you think that they are, then you should stop reading now and go back to whatever it is that you could be doing.  This essay will be lost on you.

Something is wrong and our “system” is letting people of color down over and over again.   African American men, are being unjustly murdered in the streets of American by the police, agents of our governments, and to this date not one has been convicted of these crimes.  Not one.  This is not opinion, this is documented fact.

Black men being shot to death with their hands up, while reaching for their wallets, strangled for selling cigarettes,  shot in the back while running away.   Unarmed black men shot with semi-automatic weapons and having weapons planed on their dead and dying bodies.

All of these murders absent of justice, the justice that would have been applied in all likelihood, were the victims white.   Ask any person of color if they have ever been pulled over for “driving while black”, see what they say.   This is no secret.

It would not be much of a stretch to say that a bad cop can murder a black man in cold blood and have a pretty good chance of getting away with it.  Something is wrong.

The response to this carnage, the Black Lives Matter movement , was disregarded by the racists among us with the falsely equivalent statement “All Lives Matter”  which misses the point entirely, but I am not here to talk about word choices.  Like I said, if you don’t know the nuance  then you are reading the wrong blog, I’m here to talk about justice.  Social Justice, not some conservative wordplay around “lives matter”.    Any willful ignorance or blatant racism you may have is not my responsibility to fix.

The President of the United States said that football players who don’t show respect to the flag, or to the anthem should be fired. That if owners don’t do that, that “patriotic” American’s should boycott the NFL.

With no due respect Mr. President, you don’t get to decide what is patriotic.  You don’t have the mental agility to be able to choose your own socks in the morning so your lectures will fall on deaf ears.  Your inability to understand the actual issue only serves to add to the mountain of evidence of you own racism.

The NFL owners without exception, told the president he was wrong, that nobody would be fired, although they did fire Colin Kapernick for this very thing, but this time, they sided with the players.   Donald Trump may not be able to bring peace to the middle east, but maybe he did something even less likely, he brought the NFL players and owners together.  Whodathunkit?  By the way, did any of you notice that while many did take a knee, many had their hands over their hearts as the anthem was sung.

I really don’t know much about patriotism.  I have always been a bit leery of patriotism.  To me it was always just a hair too close to nationalism for my tastes but it seems to me, in a country that was born of dissent, that dissent IS patriotic.  Protest is patriotic.

I recognize the very real fact that a lot of people’s heads exploded when we elected a black man as our president and they never got over it and I could go on and on about the rabid racism of some extremist groups or  the soft racism of so many other Americans who would NEVER admit to racism at all.  After all, some of their best friends are black.  But what is undeniable is the fact  that the President of the United States is, in fact, an active racist who is actively sympathetic to white supremacists.    Again, that is not opinion, that is fact whether you want to accept it or not.

Trump, for some unknown reason, while Puerto Rico lay in ruins, decided this week to enflame  the inferno of racism with his ignorant words, then he has the gall to tell us, “it’s not about race”. 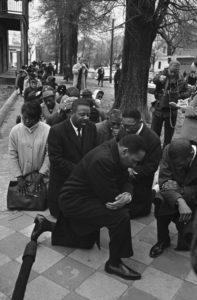 Not as long as the blacks don’t get too “uppity” right Mr. President?  They make a lot of money off the white economy and they should be grateful, no matter how many of them are shot in the street right Mr. President?    This is ALL about  race and these men, who do make a good salary and have the notoriety of their profession not only have the right to speak out, it is their duty,  a patriotic duty to give attention to injustice.

A prayer that that one day, maybe, that the anthem will belong to them too.   Because right now, it’s really hard to make a case that it does.

But the racist right will never understand that.

Old pirates, yes, they rob I

Sold I to the merchant ships

Minutes after they took I

From the bottomless pit

But my hand was made strong

By the hand of the Almighty

We forward in this generation

Won’t you help to sing

‘Cause all I ever have

Emancipate yourselves from mental slavery

None but ourselves can free our minds

Have no fear for atomic energy

‘Cause none of them can stop the time

How long shall they kill our prophets

While we stand aside and look? Ooh

Some say it’s just a part of it

We’ve got to fulfill the Book

Won’t you help to sing

‘Cause all I ever have

Emancipate yourselves from mental slavery

None but ourselves can free our minds

Wo! Have no fear for atomic energy

How long shall they kill our prophets

While we stand aside and look?

Yes, some say it’s just a part of it

We’ve got to fulfill the book

Won’t you have to sing

‘Cause all I ever had

All I ever had

These songs of freedom

I Took Tom Petty For Granted