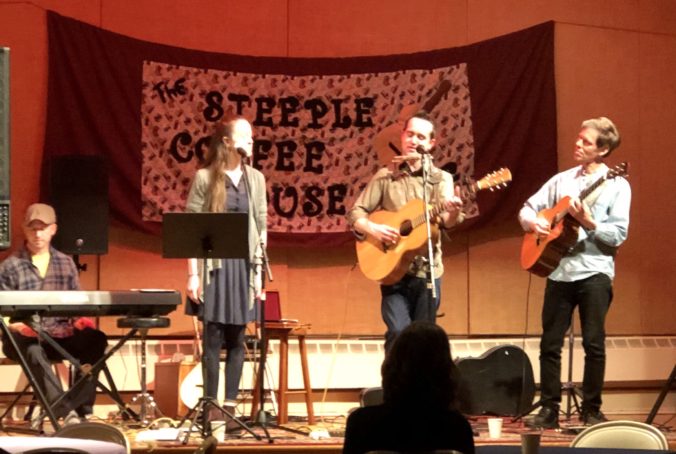 In the past year or so, I’ve seen stunningly breathtaking performances in a variety of places you might never expected.

I saw a world renowned trombone player and her bandmates play in front of a bank at a farmers market in Cazenovia.   This was six months after winning an international jazz award and six months before the leader of said band played to a sold out audience at Madison Square Garden with Vulfpeck.

I’ve seen what may well be the best local music festival in town take place on the front lawns of my neighbors homes while art was being exhibited on their porches.

Churches, no longer used by their faithful congregation have become places of art and music everywhere you look,  places like Homer, Brewerton, and now Cortland with their beautiful Rose Hall.

Even active churches are getting into the act, The United Church of Fayetteville has been doing it for years with their Steeple Coffee House.  Last Saturday was my first visit and I could kick myself for not supporting this wonderful community based effort sooner.

I was there to see two time Sammy Award winning songwriter Austin MacRae who shared the stage with his brother Devon on mandolin, piano and vocals, Zoe Mullan-Stout on vocals , and Jeffrey Pepper Rodgers on guitar, himself a Sammy winner and nominated for another this year.

Austin MacRae is one of the most literate storytelling songwriters I have ever heard.  His songs paint vivid pictures of the broad scope of life with empathy, heart and poetry. An Austin MacRae song is a  short story in four minutes of beauty, empathy and emotion, not to mention some damn fine picking.

Songs with dark and tragic themes, songs with joy, happiness and gratitude.  The man lays it all out there and as an audience there is a lot to identify with emotionally, that’s how the songs get ahold of you and take you for a ride.

Right away you could tell the show was going to be something special. The Steeple Coffee House is a kind of a half gym in the church hall and features such a  welcoming spirit from the community along with some really good coffee to warm away the single digit Syracuse chill that night.  Couple that with the music and you have a beautifully intimate setting with flawless acoustics.

Austin was, as usual, brilliant, performing songs from his entire catalog.  Songs about the love and heartache of being a step-father, like “Sides I’ve Never Seen”.  Songs about marriage and how at various points in life each partner has to let the other lead , like “Follower”

One of my favorites, is “Bats in the Attic” a song about just getting through stuff ,that life will work out, and it’s told from the point of view of finding that the beautiful house you just bought, is harboring a colony of bats.  Yeah. Bats.     The song was beautiful performed with the spectacular voice of Zoe Mullan-Stout on harmony vocals.

I never really considered it in the years I’ve been listening to him, but when Austin played “Early Morning Rain” and explained that one of his greatest influences is Gordon Lightfoot, it made perfect sense to me.  Devon MacRae on mandolin coupled with Austin’s guitar was magic.  Being an honorary Canadian I really appreciated hearing the song.  I need to listen to more Gordon Lightfoot.

Austin, Devon, Zoe, and Jeffrey Pepper Rodgers played a version of the John Prine classic “Angel from Montgomery” that I swore was going to have the players levitate off the stage it was so good. Rodgers on guitar is extraordinary, not just in the tone he gets from the instrument, but maybe more so in the technique of knowing to let the notes breathe and that there  is music in the spaces between them.  His guitar adds so much texture and nuance to the song.

Speaking of back catalog, “Potter’s Field”, a song from the days when Austin and Devon would regularly play as Brothers MacRae is a foot stomper of a song.  When I was driving to the show with my family I was telling my wife I hoped it would make the setlist.  When it was played Saturday night I damn near got up and danced, which is a spectacle nobody needs to see.  It rocked though, no doubt about it.

A very special treat to get a chance to hear Jeffrey Pepper Rodgers and Wendy Sassafras Ramsay play “How Long til It’s Too Late” from the Sammy nominated Live and Listening. The song is a wonderful sing along song about communication.  Rodgers is master on guitar, a virtuoso,  and Ramsay’s voice with his is wonderous beyond words.

Austin MacRae and friends put together a truly lovely evening of entertainment and community in that special place last Saturday.  If you get the chance you would do well to see Austin, or any of the other players the next opportunity you can.

Syracuse and Central New York is literally overflowing with music these days.  In these difficult times, our job is to keep our spirts alive and souls nourished. Consume art people!  Go hear live music and if your very lucky, the place you go to hear it, will have an awesome piece of chocolate cake for you like the Steeple Coffeehouse does.