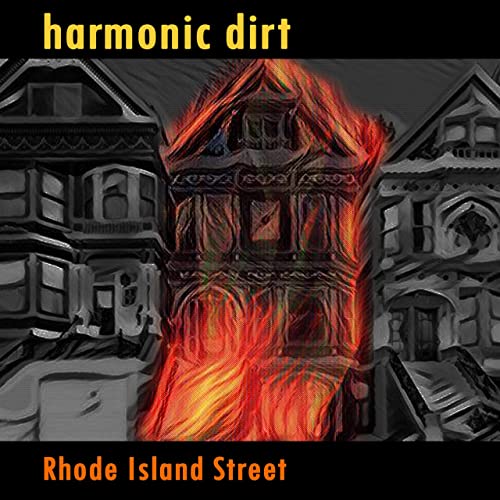 There isn’t another band in town like Harmonic Dirt and I can’t quite place my finger on it.

It could be the musical composition, how the songs drink from the well of a multitude of musical influences, from bluegrass & country, to the Dead, to power-pop and creates a kind of genre all of it’s own and just like the very real marital union of the couple collaborating on the songs, the union of lyric and music creates it’s own kind of aural vocabulary.

Perhaps it’s James DaRin’s rhythm, gently propelling the music like a steady freight train, driving the songs from the Canadian Maritimes to the badlands of the American southwest and all points in between.

Or is it the banjo pickings of Taylor Bucci whose tone and texture in his playing is as lyrical as any vocal could be? And speaking of vocals, when Bucci and Gridley sing in harmony the effect is pure magic.

For me,  hearing Harmonic Dirt play is comforting and warm, even when the themes of the songs touch on darkness from time to time.  Harmonic Dirt is like putting on that comfortable flannel or fleece, grabbing a drink and sitting around the campfire under an open upstate sky, even if that campfire takes the from a downtown alley, a flower farm or a neighborhood art festival.

With their new CD Rhode Island Street, Harmonic Dirt have solidified as a four piece band and along with some of our community’s best players sitting in, released a truly great album that blows away any restrictions of genre or category.

Opener “Comfort Me” a song with images of the dark sea and sky, as Gridley sings about floating on a rudderless lifeboat, features some of the best guitar around, playing in harmony with Bucci’s banjo which kind of serves to push Gridley’s guitar into a more forceful, or dare I say aggressive stance with the rhythm section of DaRin and Coleman pushing the song forward like waves of the aforementioned sea.  An instant favorite right off the bat.

The title track, is a beautiful little bluegrass waltz about watching an old home burning down and relieving the memories of lives lived within its walls.  The more I listen to it the more my mind pictures this song as a sort of “Irish wake” for the old place, the stories told are not particularly sad as the flame unleash a flood old stories and rekindled emotions.  If you close your eyes when you listen to this song, you can almost picture it as the memories of days past are sent up to the sky in clouds of smoke.  We all have these old places and they all hold our stories within their walls

“Catch Me” has been a staple of Harmonic Dirt’s performances and a fan favorite for a while now, but the addition here of violinist Ericka Longo to the recorded track takes the song to a whole other level and it’s a highlight of this album.

Also around the campfire helping out on other tracks are guitar virtuoso Bob Gaus on “Blue Moon Atlas” and Scott Ebner, who plays piano on “Ashes”

It’s hard to pick a favorite track on an album of so many favorites so I wont do that, but perhaps for me anyway, the uplifting closing track “What Did You Take”  is a perfect place to land at least.  A song that reminds us all to breathe as we all head forward into tomorrow. A rocking country song that  features the wonderfully punctuating trumpet and perfect harmony vocals  of Tami Shutt and Joe Plessas on steel guitar.  In a world where we could all use some uplifting “What Did You Take” fits the bill to a tee.

With Rhode Island Street, Harmonic Dirt have released a world class album that is an absolute joy to listen to.  One of those albums where your friends will get sick of hearing you laude it’s praises.  So just cut to the chase and buy them a copy and welcome them to the campfire.  There’s room for everybody, no matter where that campfire is.

The very next thing I write is for the mail list. I’m going to lay out my future plans here, tell some stories of my decent into madness and how I came out smelling like a rose.

I will also have some stats for you, kind of the neilsen ratings for blogs, and I’ll tell you all what I learned about my mail list skills.

You won’t want to miss it, so subscribe..you’ll only see it in the mail …