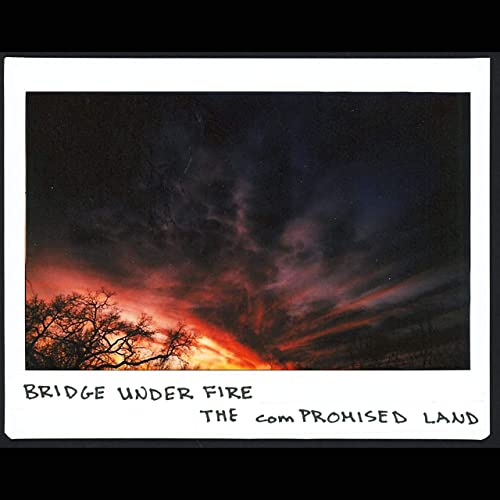 Bridge Under Fire – The comPromised Land

When I ponder the sometimes shaky state of rock n roll these days, very often I ask myself, “where are the anthems”?

Goddamnit, the kids need anthems these days.  The country is on fire, sickness and death is everywhere, where are the punk rock songs with lyrics pulled from a hopeful heart and shouted to the universe like a life affirming wail.

I was lucky, I cut my teeth on Joe Strummer, Billy Bragg,  Paul Weller, Henry Rollins.

That music saved me, I can’t imagine being able to navigate my more angstier years without their angry, but plaintive. soul affirming voices.  Voices that hit you like a ton of bricks, songs filled with emotion mirroring my own.

But what about today, as we sit in what is essentially isolation, hard to get to our friends, hard to get to those who know us, know what we are going though, as life and yes, even death touch us all every day.  Where are the songs that lift you in righteous anger and through that shared anger, allow us to bind together, full of hope.

I know what you’re saying as you read this, Tierney is one of those “rock n roll romantics”.

You bet your ass I am and with that badge proudly worn, I ask, where are this generations Westerbergs and Strummers.  Where are the ringing guitars and where are the drums that will knock you over like a freight train.

Where are the goddamn anthems?

I found some.   And they are glorious.

With The comPromised Land, Syracuse’s Bridge Under Fire have released a soaring collection of anthemic rock n roll that speaks to the current moment in time, but does so with songs that can speak to any time where life is hard, where disappointment and loss is palpable.  In short, it may be the perfect album for this moment in history.

A bit of a concept album that takes the listener through Elisabeth Kubler-Ross’s stages of grief and acceptance, but the songs aren’t quite as direct as that,  you’re going to have to let what the emotion in the songs tells you about the stage is that’s being described.

Hell, the truth is most of us are floating through one or more of the stages pretty much all the time and hardly think about it.  That’s the beauty of art though isn’t it?  When it instructs you about your own mind, your own emotions.

That’s what makes The comPromised Land so good.

Kicking right off with “Tasty Sammich” a song with the soaring guitarts and vocals that aboslutley rise you out of your chair.  A song of resilience, defiance in spite of adversity. A song about charging into the void, “what’s the worst that they can do…….don’t let them break you down”.  Delivered in a Husker Du style roar that raises those hairs on the back of your neck like any uplifting anthem should.

“Quarenteenage Dream” is a massively huge blast that puts one back in the place where teenage boredom only led you to the darker reaches of your brain but never loses hope for a brighter tomorrow.  The song features the perfect sing along chorus for the folks in the pit.

The album closes with the perfect song of coming out of darkness “That’s Not Going To Be Good For Business”.  Featuring a fantastic guitar solo and uplifting lyrics that not only face the future after a dark patch but does so with defiance.  A raised finger to the demons of the past.

Listen, I don’t use these words lightly, and I know I sound like the old guy here, but I’ve seen a thing or two in the punk rock world, and that music I grew up on is scared.  Much in the way a jazz guy hold Miles and Trane to be scared.  Punk rock has to have authenticity and I can smell it when it comes at me without it.  So take these words with that in mind.

The comPromised Land  is an instant punk rock classic as far as I’m concerned and Bridge Under Fire is the band that a lot of us has been waiting for.  It checks all the boxes, heartfelt, intelligent lyrics, soaring guitar, and a big booming voice to deliver the goods.  With this album, Bridge Under Fire has produced a sort of Zen Arcade for the 21st century.  I can’t wait to see where they go next.

So this week I’ll recap 2020 and show off some “behind the blog” stuff to my e-maill recipients and I’ll even talk a bit about how all THAT is changing. Ranting into 2021. Subscribe below.