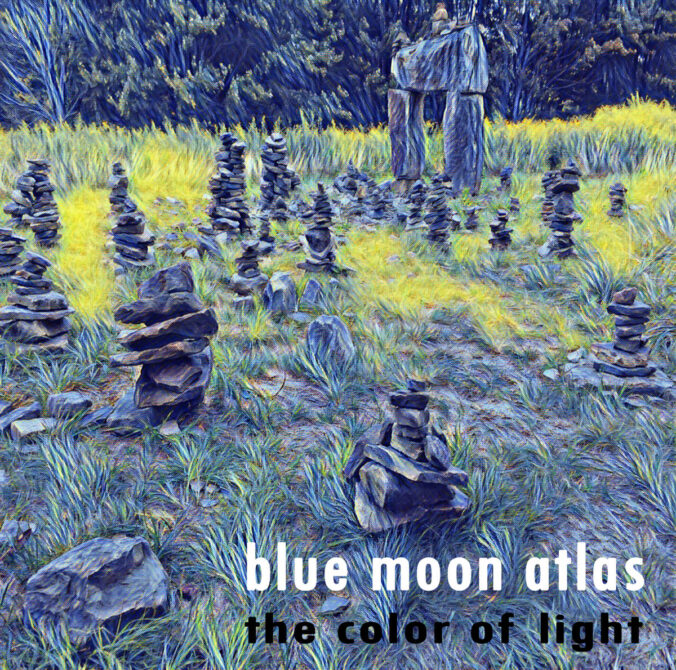 If you’ve gotten to hear Harmonic Dirt play over the years you  know that at the band’s core is husband and wife duo Mike Gridley, he of the sweetest voice around, and Susan Coleman, lyricist par excellence.   So it would only go to follow that side project, Blue Moon Atlas, would also feature literate words sung by a voice that would be perfect around the campfire telling stories.

But you would be wrong.

Not a lyric nor  a voice to be heard.

Blue Moon Atlas paints its pictures with a different brush than you are used to but  the canavas is just as colorful.

Whatever happened to instrumental rock anyway?

Instrumental groups had their huge heyday in the  60’s where artists like Dick Dale could create grooves and moods that were as lyrical as any other more verbose songwriter of the time, painting pictures with his virtuoso guitar that could only be pictured in the listener’s mind.  Groups like The Lively Ones and The Ventures would toss a dirty sax solo into the mix, creating other picturesque vistas with sound.

With the ability to paint pictures in the mind without words, without human voice it’s only natural that such these compositions found their way into cinema, maybe most notably by Ennio Morricone who would use elements from rock instrumentals and surf music in his “spaghetti western” film scores.

With The Color of Light, they fit like a glove.

Along with Harmonic Dirt banjo player Taylor Bucci on drums, the trio paints mood music in the surf and neo-psychedelia tradition with song tittles that mention color in the way a painter names a painting.

The rhythm section of Coleman and Bucci lay down the canvas upon which guitar master Gridley  adds color and texture, and mood, together they produce some of the best grooves around.

“Purple Dragon Flame” rolls on like a groovy Medeski Martin & Wood jam with a rolling surf guitar over piano, drums and bass.

“Blue Cave Flickers” has a definite stax/soul vibe to it with a lyricism that sounds like a lovely sunset walk on a late summer evening.

If you’re looking for a song that while it doesn’t SOUND like the Grateful Dead, but upon hearing it you can tell that the Dead happened, look no further than “Rose Colored Arch”

The Color of Light touches on soul, blues, surf and dare I say even a bit of funky jazz here and there.  Blue Moon Atlas have released a collection of music that is eminently listenable and picturesque, but they leave it up to you to determine what the pictures mean.   That’s the beauty of the music, you can put it on to be the soundtrack of your life, or you can plug in the earbuds, close your eyes and go where Blue Moon Atlas takes you.

So this week I’ll recap 2020 and show off some “behind the blog” stuff to my e-maill recipients and I’ll even talk a bit about how all THAT is changing. Ranting into 2021. Subscribe below.

Bridge Under Fire – The comPromised Land