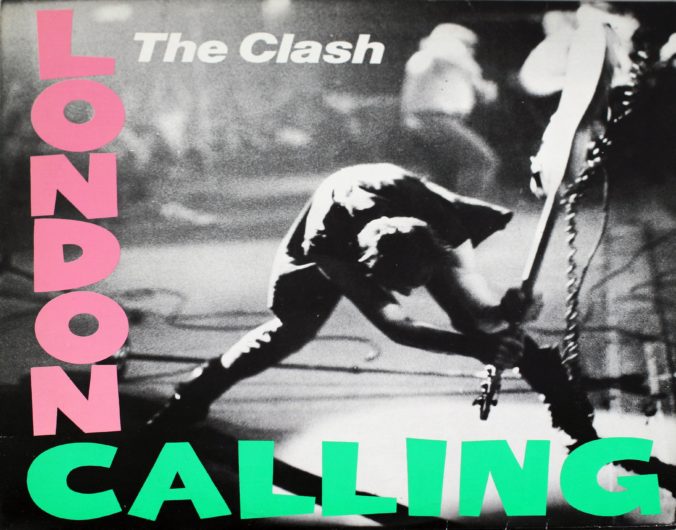 In these days of evil Presidentes, working for the clampdown.

But lately one or two has fully paid their due

For working for the clampdown.

Joe Strummer where are you now when we need you the most?

Even before the title track’s staccato guitar blast through the speakers like a jack hammer to the temples, we already knew that The Clash were “The Only Band That Matters”.  The first two albums were already well worn with the guys I hung around with.  We knew that The Clash, though they came up through punk, were going to take punk to new places, and transcend punk without ever selling out, and their message was the opoosite of our other idols, The Sex Pistols.  Where the Pistols said “No Future!”, The Clash said “The Future is Unwritten”.

In the US, their second album, “Give ’em Enough Rope” came out first but thanks to a first rate record store in town we were able to get our grubby little paws on the UK version of the self titled  first album too.

“Give ’em Enough Rope” produced by Sandy Perlman (who also produced The Dictators) recorded the album with a commercial sheen but not so much that it held back the power of the band (as if anything could).   The album leads off with “Safe European Home” which starts with a single snare beat that for my money is every bit as iconic and identifiable as that guitar CHUNG that the Beatles started “Hard Days Night” with.  Go ahead, give it a test, get your nearest leather jacket clad punk rock purist over and just play that first beat for him or her, they can name THAT tune in one note.  The album is worth the price of admission for Tommy Gun alone.

The REAL first album looked like a punk rock record, a torn mimeographed photo of Joe Strummer, Mick Jones and Paul Simonon against an olive drab background with the red lettered Clash logo.  Songs that came at you like they were shout from a water canon during a working class uprising at the Notting Hill Carnival like “I’m So Bored With the USA” and “London’s Burning”

Had The Clash called it quits right then and there, they would still be legendary.  They would still take their rightful place among rock’s best on the strength of those two albums alone. Everyone knew it.  Everyone knew that these recordings were head and shoulders above so much of what else was out there, and what else was out there, especially in the punk rock world, was pretty damn good.   Heading into the studio, with the unpredictable Guy Stevens at the helm and a mountain of hype behind them, they had to know that the pressure was on.

Funny thing about pressure, it can crumble an artist, just ask Brian Wilson who was driven mad by it by all accounts. Pressure can set expectations that nobody could ever meet, just ask Axl Rose about Chinese Democracy.  Pressure can bring down buildings, but pressure also creates diamonds given the right chemistry.

London Calling was released in the US in early January of 1980, two weeks after it’s UK release which is why you will see it listed in “best of the decade” lists for both the 70’s and the 80’s

1980 when the two super powers were squared off in a battle of who had the biggest bombs, and who could blow up the world first. When the US was being held hostage by religious zealots in Iran.  It was a year later when in retaliation, we elected our own evil religious zealot, we showed them didn’t we?   It’s easy to think back fondly on the era of the 80s in some respects, with our Members Only jackets and big hair, but the world was on the brink.  London Calling is an album of that era.

It was a blisteringly cold day when I left my Tipperary Hill neighborhood home and got on a bus to the Syracuse University neighborhood heading to Desertshore Records.

Desertshore was the kind record store they write books about, a white cinder blocked room, with aisles of records of all kinds, new and used. Racks and racks of cassettes. Punk rock tee shirts on the walls. I got a huge Joy Division poster there once.   On the new release rack was London Calling, and this was my first look at the now iconic cover.  The Pennie Smith photo of Paul Simonon smashing his bass was all I needed to see. The homage to Elvis Presley’s debut album made the packaging all the more perfect.

I would later read that Smith didn’t think the photo was any good, it was too blurry.  These days it’s remembered as one of the great rock ‘n’ roll photos of all time. (I personally have a canvas of it that I haven’t mounted yet.)

The album was a double album for the price of a single.  (kids, a “double album” is a record set  consisting of two vinyl disks,  they typically came in fold out covers which could be used to clean one’s weed prior to smoking it.  That’s what I’m told anyway.)  Two disks jammed into one sleeve.  When I was on the bus back home I carefully cut into the cellophane wrapping to get at the goodies inside.   The disks themselves were inside inner sleeves with the handwritten lyrics printed on them.  I read every one of these lyrics on the bus back and raced up to my room to get this thing on my turntable.

My jaw hit the floor.  That staccato guitar, the bass line, right out of the gate.  It was on like a freight train.  A song largely about the times in which it was written, addressing “nuclear errors” and accidental war.

“London Calling to the far away town, now war is declared and battle come down!”

They even address the hype surrounding the band head on:

“London Calling now don’t look to us. Phony Beatlemania has bitten the dust.”

I had barely caught my breath from hearing the title track when their cover of the Vince Taylor obscurity came on.   “Brand New Cadillac” was recorded in one take, untracked, live in the studio.  It wasn’t meant to be on the album. It was a warm up track that the boys played to get loose.  Producer Stevens walked in and said “ok boys lets hear it” and they started to play.  Stevens was rolling tape, and when it was over, he said.  “That’s great boys!  That’s track one in the can!”

Drummer Topper Headon said, “But Guy, it speeds up at the end!”

It had to have been liberating to be recording with the more free-wheeling Guy Stevens after the experience with the deliberate, methodical Sandy Perlman.   Stevens, who had produced albums for Mott the Hoople, one of Mick Jones’ favorite bands and biggest influences, was known as a loose canon, an abuser of substances of all kinds, and possessing a volatility that was the stuff of legends. If he wasn’t happy with the way things were going in the studio, he would come out of the control booth and get in the players faces, flailing around, throwing things.

The sessions were filled with chaos and implied violence. Steven even poured a bottle of wine on a piano while Strummer was playing it.    Tracks were called done after one or two takes.

Deciding to hire Stevens and finding him were two different things, Joe Strummer had to track him down in one of his favorite Oxford Street watering holes.

But you sure can’t find fault with the outcome.  London Calling is a perfect record.

Every track on the album, bar none, was, and still ls a “holy shit” moment, like “Guns of Brixton”, a Paul Simonon song and  one of the only Clash songs on the album not credited to Strummer/Jones, a song inspired by the recently released Jimmy Cliff movie “The Harder They Come” that foreshadows the Brixton Riots to come in response to police brutality.

“When  the law breaks in, how you gonna go?  Shot down on the pavement or waiting in death row?”

That’s some gangsta shit right there….

The songs drew from jazz, reggae, Motown and more.  The Clash challanged everything so why not challenge what a punk rock band is supposed to sound like?

Halfway through my listening my doorbell rang, it was my friend Ed who had his own just purchased copy of London Calling, we hung out, drank PBRs and listening intently to every note on all four sides of this masterpiece. Then we did it again.  It was glorious.

You have to remember the time, late 70’s early 80’s what would soon be called “classic rock” was fine, we all seemed to love The Stones, The Who, The Yardbirds and the Kinks most of all.  We also really liked most of the 60’s San Francisco bands, I mean Surrealistic Pillow was a favorite.  But it wasn’t OUR music.  This was OURS, it spoke to a time and place.

We devoured as much punk rock as we could get our hands on but THIS, this was different and we knew it.  This was the greatest rock ‘n’ roll record ever made,  it’s been forty years gone by now almost to the day and I have seen no reason to change that assessment.

A few months later I carelessly left the 2nd disk on my bed and sat on it, breaking it in two.  I immediately got my coat and walked, WALKED to Fairmount to Gerber Music to get a new copy. Walking like Paul to Damascus was my penance for being so stupidly careless.

The Clash were my cultural entry to everything, from expanding my musical palate into jazz, hip hop and reggae to my rather left wing political point of view, and this was their finest hour.

I still listen to London Calling regularly and I am still in awe of it,  but I miss those times.  I miss the days of youth when a well made, passionate collection of songs could bring you to euphoria. I’m still a music obsessive, make no mistake, but it feels different when your’re 16.   I miss the days, long gone now, where music was something you had to make an effort to acquire, it was to be collected, not downloaded and deleted when you need more room for selfies.

I miss bands that take fiery political stances in a world on fire.  Where are those guys now when we need them the most.  Where are the protest songs? We NEED a riot of our own right about now.

“Let fury have the hour, anger can be power.”

I miss my friend who I somehow find myself estranged from these days.  I hope he is well and he knows that I love him.

The Clash used to call themselves “The Only Band That Matters” and I know that was a bit of self-aggrandizement and sloganeering, but they weren’t wrong.

With London Calling they proved it.

Well you’ve made it this far, why not sign up for more?  You ARE a glutton for punishment after all.