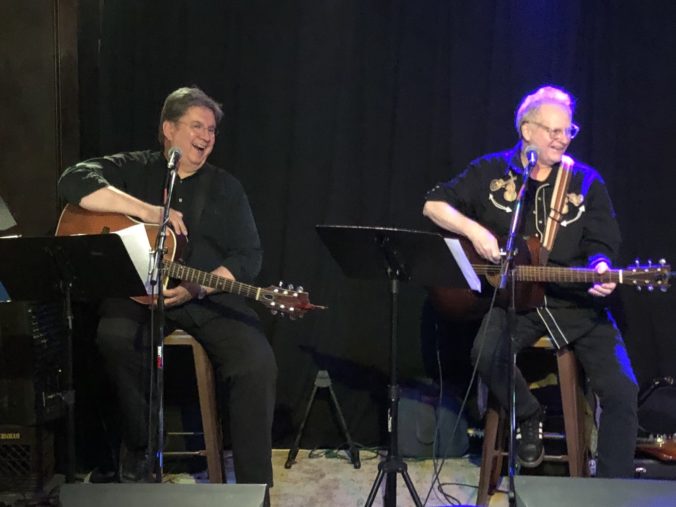 A few years ago Alec Baldwin was on Late Night with David Letterman and he was discussing his efforts to get his mom, who lives here in the Syracuse area to move away, to move out west and away from the brutal Syracuse winters.

“and give up Wegmans??!!” was her heartfelt protest.

Were the same decision to be placed in front of me, I’d say, “and give up Frenay and Lenin??!!”

I can get groceries anywhere.

Look, for me, it’s always about the songwriters.  Give me a hook and a dead clever lyric and I am on board. I have my favorites like everyone else, Elvis Costello, Marshall Crenshaw, AC Newman, Lennon & McCartney, Ray Davies, but right up there with all those guys has always been Gary Frenay and Arty Lenin.   Gary & Arty are pop craftsmen of the highest order and if you don’t know, you are missing out.

Back in my earliest days of sticking a toe in to the water of local music here in Syracuse I was always told, “but you have to see the Flashcubes”  I think I may have seen them in their original run a single time before they called it, what they then thought, would be a day, but I saw Screen Test a bunch of times and I remember the great Dave Frisina telling his listening audience that if you went to a Screen Test show and weren’t entertained he would personally give you your cover charge back.  I’m pretty sure he never had to go into his pocket to make good on that guarantee.

The songs and performance were fantastic, for me, jaw droopingly so.  I was convinced that it was only a matter of time before these guys got whisked away to the big cities and national prominence.  The lads were even featured on an MTV unsigned artist show.

I followed their post Screen Test activities from the Neverly Brothers, to Arty & Gary playing in what became Syracuse’s longest running residency at the SU Sheraton which still runs every Wednesday from 5PM – 8 PM, now into it’s 19th year.  These shows are pretty much the coolest free form radio station you ever heard of come to life as they mixed in some of their own songs with basically whatever strikes their fancy at that moment.

When I moved into the neighborhood I live in with my family I found out there’s  a street party/art festival just a block or two away from my house and lo and behold one of the musical acts that’s a mainstay at this festival is Frenay & Lenin.   Come to find out Gary Frenay is a neighbor.

I felt like I had moved right onto Penny Lane.    I idolized these guys.

To this day, their British Invasion inspired tribute The FabCats is a highlight at the neighborhood park’s music series.

I would go see these guys every chance I got, but where they really hit their sweet spot for me, is in their own songs.   Between their solo releases, unreleased stuff, Screen Test albums, and Flashcubes stuff, Frenay & Lenin have amassed a body of work that stands right up there with ANYONE.    Which is why when the lads announced an all originals show at The Listening Room at 443, Syracuse’s newest music venue, last night,  there was no way I was missing it.

I made the right decision.  It was fantastic.

Sometimes you’re not just glad to be at a performance,  you feel lucky.  You feel blessed to able to be there.

For performers to have a body of work of such high quality and true pop craftsmanship to draw from it’s hard to not be amazed as Gary & Arty pulled out one song after another from their personal repertoire, and that’s it isn’t it?    Repertoire. These guy have done the work, crafted the songs, evolved them over time and performance.  The result was an evening of three sets over three hours of pop perfection.

Emotionally  it’s hard to not be moved when you hear songs played, years or even decades after your first fell in love with them. Songs you sang, alone in your room when you’re a goofy teenager, and played over and over.  Song’s like “Syracuse Summer”, which was not just an east coast take on the sound of the Beach Boys, it was an affirmation of place.  A romantic vision of a city that made you see the place with kinder eyes than all those naysayers would tell you was appropriate.   The test of time in our much maligned city is telling you that romantic vison was the correct mindset as the city changes for the better every day.

It’s hard to not get excited when you hear songs whose very opening chords still give you goosebumps to this day,  like “It’s You Tonight” or “When We Close Our Eyes”, and the older I get I hope I never lose that feeling I get when I hear newer songs like “Notes From Trevor” and “Best Seller”. I maintain that may be the best one-two punch to start off an album in recent days.

It was fun to hear some of the back story on some of these songs. How Gary wrote “Opening Day” juxtaposing the promise of the first day of baseball season with the springtime of a relationship.  (I will of course forgive his Yankee fandom).  I got a kick out of hearing how Arty was inspired to write  Angelique  after being addicted to the 70’s gothic soap opera Dark Shadows.  Yes, Dark Shadows

The crowd was eating it up, every song, every story and what a nice group of people.  I can’t recall the last time I saw so many people hugging.

It went so well the guys even commented that they need to do this again and I sure hope they do and soon.  The perfect night, the perfect performers, the perfect venue and an all too rare performance of great songwriting.

For a perfect end, to a perfect evening how about former Tearjerker and current voice actor (He’s Spongebob!) Tom Kenny hopping on stage for the evening’s only cover, Eddie and the Hot Rods “Do Anything You Want To Do”?   I mean yeah, it IS a cover but like Gary said, the Flashcubes version is the definitive version and take it from me, he’s right.

It was like the sweetest party you ever went to.

Sometimes you just feel blessed to be where you are.   I wouldn’t want to be anywhere else.

I think if you polled the crowd last night, they would say the same thing.

On a personal note, remember that neighborhood art festival I was talking about?   It’s called Art on The Porches  and these days I am on the organizing committee of it and it just so happens Arty & Gary are playing a rare band show on one of the stages.  I am all fired up for that.  You should come down if you can.