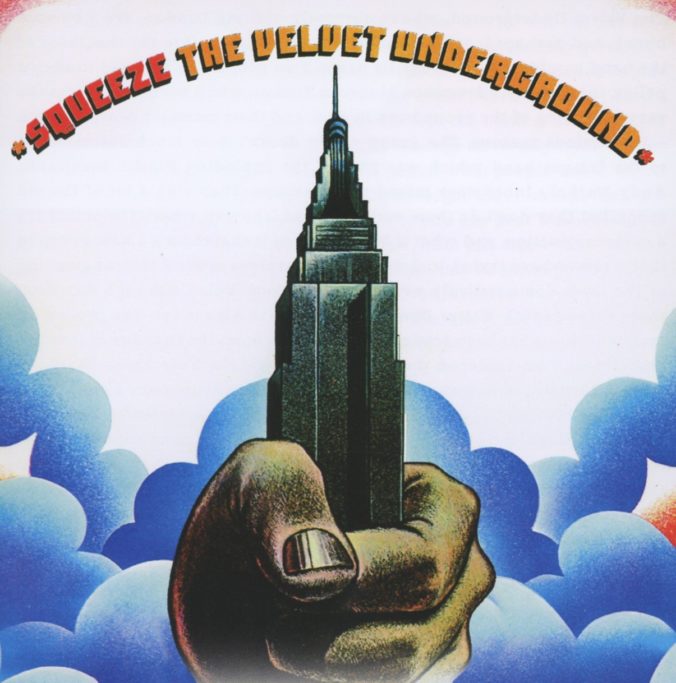 Outside The Canon – The Velvet Underground’s “Squeeze”

If you like a good rock doc, you really should see “Long Time Running”, I think it’s on Netflix.  It’s a chronicle of what would be the final tour by the iconic Canadian band, The Tragically Hip, a tour scheduled shortly after front man Gord Downie was diagnosed with inoperable brain cancer.  A death sentence for Gord, and for the beloved band.

In the film, guitarist Robby Baker recounts a message he got from a fellow musician after the last show:

“I received a letter from a musician in Philadelphia. He followed the band for years, and he watched the last concert by himself. He bawled his eyes out. He said, ‘Rock’n’roll and bands are like hot air balloons that go up. If you’re really lucky, you get up to the jetstream and you travel really far and you see a lot. But at the end, you’re going to come crashing down. There’s always a bad end for a band.’ He said, ‘I’ve never seen a band—especially after a 30-year journey—land the balloon safely. They landed the balloon, and it was glorious. And everyone was there to cheer when it landed.’ ”

I think there is some truth in that, most bands don’t land that balloon gracefully.

In fact some bands are still trying to get back in the air even after the balloon has seemingly come crashing down.

But who are we to judge right?  Singing a song and doing a dance never hurt nobody right?

But it’s bands like that, that I am kind of obsessed with.  Bands that continue, maybe  in name only, even when members have left.   I find it interesting and if you take the work of these bands that have opted to continue, on it’s own merits, you can get some hidden gems out of it.

You can  get some real duds too, but we can talk about Van Halen with Gary Cherone later.

Which brings us to “Squeeze”, the last album credited to The Velvet Underground.  A much maligned album that history has not recorded as part of the VU “canon”.

I will admit, I wanted nothing to do with it.

No Cale, Feh (There hadn’t been John Cale for a long time at this point.)

And Mo Tucker on maternity leave even.

” ‘Squeeze’  is NOT a Velvet Underground album!” I used to say with righteous indignation, forgetting that even before this album, Doug Yule had released more music as a member of the band than John Cale did.

“It sucks!” I used to say, never having heard the album, in fact due to it’s very sparse distribution. I’ve never held the thing in my hands even.  Never saw a physical copy.

My opinion was, of course, grounded in the intractable muck of my flawed understanding of punk rock purity. A construct that assigns authenticity to the idea that nothing changes, nothing evolves.  This, of course,  flies in the face of everything I have come to learn about art and that includes so called “underground” music.

The Velvet Underground were godfathers of punk and an album with no original  members of the band just wasn’t going to fly, even if Doug Yule sang in a fair number of late period Velvets songs, including some really great ones like  “Who Loves the Sun”, his vocals on “Candy Says” are so sweetly innocent it gives the song heartbreaking poignance.   It has been postulated that Yule didn’t know anything about Candy Darling, the trans actress from the Warhol crowd whom the song is written about, making it maybe the sweetest soong about sexual identity ever.

Doug Yule’s voice is all over the album widely accepted to close the book on the Velvet Underground, “Loaded”, an album that Maureen Tucker doesn’t play on, but with the departure of Reed somehow that was the final nail in the coffin and maybe it should be.  But what to make of this album?

46 years later, I like to think I am more open minded and at the same time far more curious.

What is this album like?  Is it as bad as I thought it would be?

The miracle of streaming has put this much maligned album in my pocket.

Th truth is, It’s not a good Velvet Underground album, but it’s not a bad album.

In fact, it’s quite enjoyable.  It’s not in any way earthshaking by any means, but it is a good listen.

It’s true there isn’t an original member of the band on this thing, Cale left after While Light/White Heat,  Lou Reed left during the tour supporting Loaded, , Sterling Morrison left the band to return to academia, and Maureen Tucker, was unceremoniously dismissed from the band by manager Steve Sesnick.

Sesnick is an interesting and pivotal character in the story of this album, it would be so easy to simply brand Sesnick as the villain in the downfall of the Velvet Underground, and in many ways, history does not treat him fondly, nor should it, but it was Sesnick who recruited the 21 year old Yule to replace John Cale and he did so without missing a beat.  The talented multi instrumentalist replaced Cale’s avant-garde influence with the pop sensibility that Lou Reed and the rest of the band wanted.

The truth is, Doug Yule is  a for far too long ignored hero of the Velvets who never got the recognition he deserved, not even from his bandmates.

There would be no “grey album” or “Loaded” without Doug Yule.

On “Squeeze” , “Little Jack” and “Dopey Joe” sound like they  could have been songs by that other “formerly known as The Warlocks” band,  The Grateful Dead, and pretty good ones.   “Caroline” is a fun bit of bubblegum, while “Crash” has a Beatlesque kind of silliness.  I’m pretty sure the song “Louise” is a slam on Lou Reed.

Other than Yule, who plays almost every instrument here, there is a sax player, identified only as “Malcolm” and on drums, we don’t have Doug’s brother Billy, who played on the “Loaded” sessions, instead we have Ian Paice, yeah, Ian Paice of Deep Purple.  “Squeeze” is indeed a weird little album and I think that’s part of it’s charm.

“Squeeze” certainly is no masterpiece, but taken as it is, there isn’t a song on here that makes me click to the next track.  It’s cardinal sin is it’s identity, it’s branding, if you insist on using the most unfortunate term.

Is it a Velvet Underground album?   Well that depends, if everyone else quit their job at Sears, and you were the last guy left at the company is it still Sears?

If the thing had come out as a Doug Yule solo album, this album may have been treated more fondly, but taken on it’s own it’s an entertaining, oddball, lesser known chapter of an amazing band’s story, even if not part of it’s enduring legacy.

If history has been less than kind to Yule’s participation in The Velvet Underground (Nico is spoken of with more reverence for godssakes) , the other members of the group didn’t help much. He wasn’t included in the 1992 reunion tour, even though Sterling Morrison would have liked him to be, and maybe even most egregiously, he wasn’t inducted into the Rock ‘n’ Roll Hall of Fame with the band.

Lou Reed did have him play bass on his first solo album though.

As best I can figure in researching this essay, Yule has more or less come to terms with his time in the band and his legacy in it.

No, “Squeeze” is not the great, lost Velvet Underground album by any means, and it won’t make anyone’s “desert island disks” list. But there are worse albums you could listen to, and like I said earlier, we will talk about Gary Cherone’s stint as Van Halen singer later.