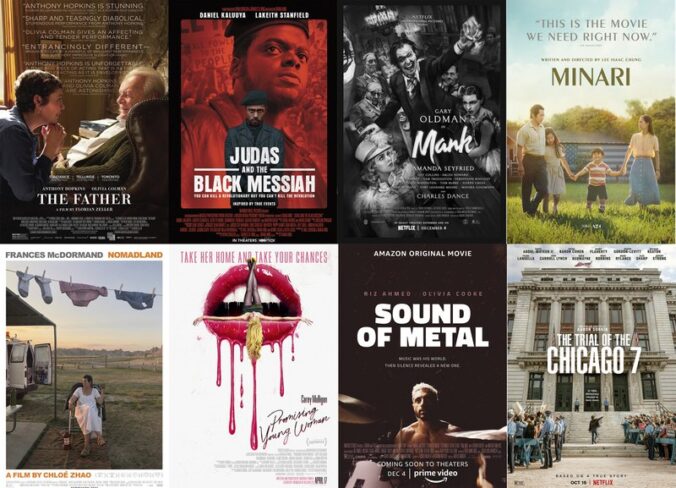 In writing far better than mine, there have been multiple essays about how the pandemic had made for a bad year for movies.

Well that’s definitely been the case for theaters and theater chains, but I would argue that movies released during the pandemic were among the best in recent memory.  Sure. the blockbuster, shared experience of watching a big budget thriller on a huge screen with state of the art sound wasn’t possible, but for someone like me, who much prefers story driven indie films, this year was a gold mine and everything was available on my home screen.   There were so many quality films available that I couldn’t keep up.

As usual the screeners I got from Film Independent were all top notch and there was a fair amount of Oscar overlap.  You know, you can join Film Independent.  Its like 100 bucks, and you get screeners all year of various films, participation in Q&A sessions with filmmakers and most importantly you get access to all the movies nominated for the Film Independent Spirt Awards which is like an Oscars for indie films only the ceremony is more irreverent and more fun.  This year of course it was a bit different but host Melissa Villaseñor did a bang up job and I hope she gets to do it again next year when things are better.

So on to the Oscars.

With the exception of the short films, which I may see after I publish this, I’ve seen every nominated film.  I follow Oscarology blogs and podcasts, I devour every word and I still can’t beat the best at this.

In any event, here are my predictions for every Oscar handed out tonight.

Will Win: Speak Now (One Night in Miami)

Come on, it’s right in. the title!

Will Win: A Love Song for Latasha

Will Win: If Anything Happens I love You

“Over the Moon” (Netflix)

I liked Soul a lot, its got everything voters look for in a film, big cast, good social messages, Pixar, Tina Fey.  This is a lock..

Will Win: My Octopus Teacher

Time absolutely blew my head off, don’t get me wrong, Octopus was great, all of these were great.  Oscar voters will love Osctopus, its got all the feels they look for and it’s been running a great campaign too.

“The Man Who Sold His Skin” (Tunisia)

Will Win: Another Round

Another Round is ALSO nominated for Best Director, it’s rare when an international film nominee gets recognition in a “major” category as well, so I think that may push it over the top.  But man, Quo Vadis, Aida was so good, right?

“The Trial of the Chicago 7,” Alan Baumgarten

Should Win: Sound of Metal

I went back and forth on this ALL week.  I even debated it in my head this morning.  In one week I went from “The Father” to “Nomadland” to “Sound of Metal”.

Metal is really loved by a lot of Oscar voters, and short of a surprise in a major category, this is where it can pick up some attention.

“News of the World,” Dariusz Wolski

“The Trial of the Chicago 7,” Phedon Papamichael

Nomadland won every Cinematography award leading up to tonight and I see no reason to believe it wont take it home tonight.  I did like the way Mank was shot  better but really who can argue this one.

“The Trial of the Chicago 7,” Aaron Sorkin

Don’t be surprised if Sorkin wins this one but Promising Young Woman was the most talked about film down the stretch, I don’t see it getting picture or Director so this is one place where this remarkable film can get recognized.

“One Night in Miami,” Kemp Powers

Will Win: The Father

Should Win: The Father

Don’t be surprised if Nomadland wins this, however, the movie is not really full of scripted dialog..sooooo

Best Actress in a Supporting Role

This one takes a bit of Oscarology to whittle into.  Seyfried was way ahead early and then Mank just disappeared from the consciousness.  Bakalova is a non-starter.  Colman stole the Best Actress Oscar from Glenn Close  two years ago, had that not happened, I think Colman would be the front runner, plus Hillbilly Elegy is so disliked you wonder how she got nominated here other that she’s Glenn Close.  What it comes down to is a wonderful performance in a wonderful movie.  Minari gets it’s attention here and it will be well deserved.

Best Actor in a Supporting Role

Sacha Baron Cohen (“The Trial of the Chicago 7”)

So ok, it’s a lead role in the supporting category.  I keep thinking this will hurt him, but he was so good.  I’m staying on this pick but boy…Paul Raci is a day work actor, still has his day job…and he was incredible in Sound of Metal wasn’t he?  I do know one thing, if Sacha Baron Cohen wins this, ALL bets are off, the voters really liked Chicago 7.  I feel pretty confident in picking Kaluuya but this category can upset a lot of apple carts.

Best Actress in a Leading Role

Vanessa Kirby (“Pieces of a Woman”)

This one is a slug fest, and of the five nominees, I have had four of them winning at one time or another.  I think Andra Day was great but I don’t buy the Golden Globes hype, Vanessa Kirby is a total dark horse and the film was so kind of grim, that not a lot of people watched it.  For me, I’m conflicted.  Viola Davis was amazing in “Ma Rainey”, but Carey Mulligan playing entirely against type channeling so much grief and rage with such skill in “Woman” is going to win this.

Best Actor in a Leading Role

I think this is a safe pick, only two other actors have won an Oscar posthumously  (Peter Finch for Network & Heath Ledger for The Dark Knight).  Boseman will make #3 but this is no mere tribute Oscar, his performance was a master class in acting, he held you in every scene.  Don’t be surprised though if Anthony Hopkins steals it.    How does that happen?  Easy.  When you fill out your ballot you figure Boseman has it locked, so you decide to give a little love to Hopkins, who is a legend after all.  Enough voters do that and you get an upset.

Thomas Vinterberg (“Another Round”)

This is as close to a lock as there will be all night, and it will be well deserved.  Chloé Zhao is a true auteur and has a cinematic voice all her own, but I wouldn’t be crying in my non-alcoholic beer if David Fincher stole this either.

Judas and the Black Messiah

The Trial of the Chicago 7

Will Win: The Trial of the Chicago 7

To understand Best Picture, you have to understand the weighted ballot voters use.  Voters rank their top five.   A movie needs to get 2’s and 3’s as well as 1’s to dominate.  This is how a shitty movie like Green Book won Best Picture a few years ago.

I expect to be sending a bit of a behind the blog thing pretty soon.