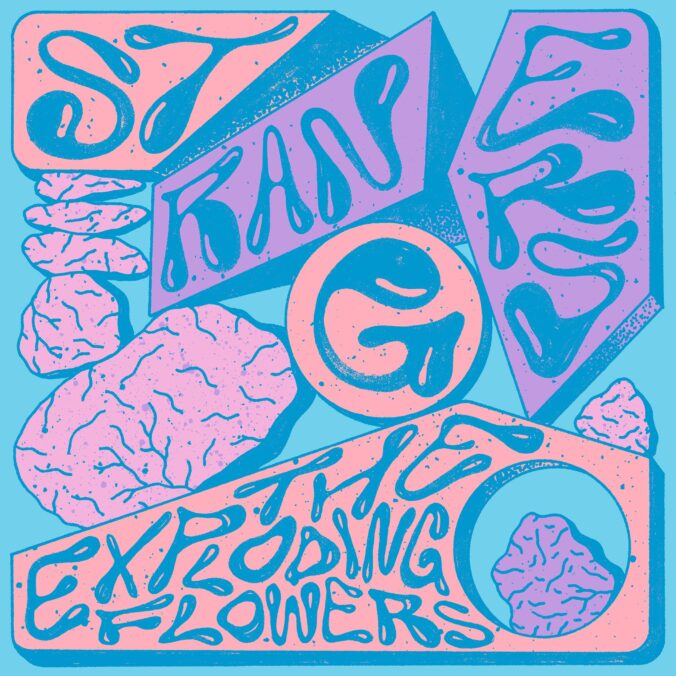 With it’s groovy cover art and floral band name you might think Strangers, the debut album by The Exploding Flowers, was an exercise in neo-psychedelia, but that’s not the gift we have been given, what we have here is a textbook example of masterfully executed power-pop that will remind you of the paisley underground of the mid 80s.  You know, that up-tempo brand of rock n roll  with heart on the sleeve lyrics in every verse, leading to soaring choruses that can make goose bumps rise with a simple four note guitar bridge?    The kind of music that makes you drive fast, with the windows down regardless of the increasingly chill winds of Central New York this time of year.

If we must use genre assignments to describe music, I would argue power-pop is a damn good, if perhaps under-appreciated one.  It takes craftsmanship to make this music, think Big Star, The Flashcubes or Teenage Fanclub.  The Exploding Flowers display that kind of  craftsmanship in spades.

Strangers rolls out of your speakers like a freight train with “Second Chances”, a rocking bit of self dialog about that conversation we all have with ourselves when confronted with adversity in spite of all of our best efforts.

“Time is Tight”  is a spectacular, soaring track about managing relationships as one navigates the tyrannies of the passage of time.. This song rocks like nobody’s business.  A song with hooks like this almost shouldn’t be legal.

But it’s that title track that really triggers that really gives you the full on, wall of sound, power-pop feeling.  Its chunky guitars punctuate the plaintive lyrics with absolute perfection, but the time they hit you with the drums and hand claps bridge to the killer guitar solo, it’s almost unfair, they have you.

Clocking in at just 7 songs, Strangers leaves you wanting more.  Every songs gets its hooks into you, every song has the kind of guitars that puts the hair on the back of your neck at full attention, punctuate that with driving drums and bass behind heartfelt vocals and you have mix that can’t be beat.

I’ve said it before, there is something in the soil in this town that grows world class power-pop and has done since before  I first started looking around at Syracuse music.  Bands like The Flashcubes, Screen Test and Dress Code sowed the seeds melodic rock perfection when I was a kid trudging through snow to see my favorite bands in long gone but never to be forgotten venues across Central New York.    The Exploding Flowers fit that tradition to a tee by bringing their own sensibilities to the mix and in doing so have released one of the best of 2020.  The album is co-produced by Josh Coy, who knows a thing or two about power-pop.

This band plays the kind of music I have always naturally gravitated toward. When we get back to seeing live music, I’m putting The Exploding Flowers at the top of my must see list.

I can think of no better gift to yourself than to get me into your inbox. Monthly updates, links to everything I’ve published between missives and some other rantings in general. Theres no marketing, I don’t share the list, it’s just for you and I and our special relationship.

Coming up before Christmas will be a recap of the past few months on the blog and some statistics (for geeks like me) to close out the year.