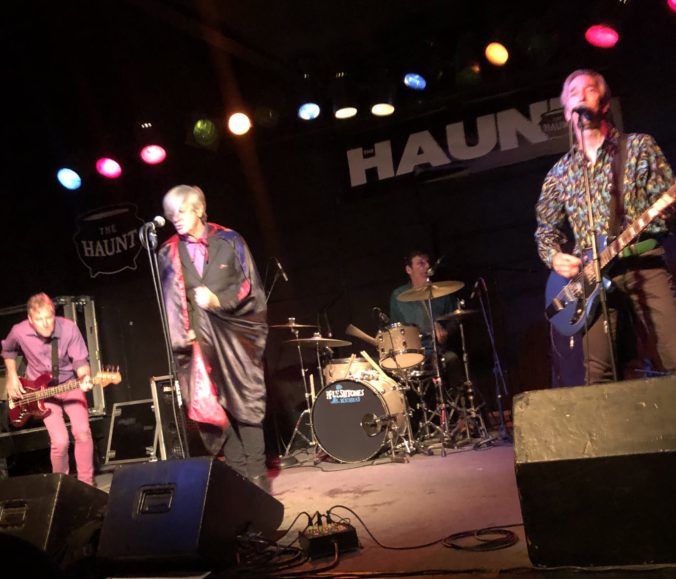 Wait a minute ..are you telling me you don’t know what “super rock” is?

Well pull up a chair grandson, it’s time for you to learn a lesson.

Take equal parts Garage Rock like  Question Mark & The Mysterians, The Seeds and The Count Five, mix in some slamming R ‘n’ B, just a touch of 80’s punk and serve with a little Farfisa organ and a whole lot of James Brown swagger and THAT , sweet child o’ mine, is “super rock”.

The thing is you can’t get “super rock” just anywhere, the only place you can get this groove is when The Fleshtones come to your town.  The good part is, after over 40 years, this  Queens originated band is still spreading the news and when you go, bring your dancing shoes and be ready to do ALL 16 dances baby.

Since 1976 these guys have been ripping it up with their high octane show, filling places all over the world and never leaving anything in the dressing room.

Last Friday these guys from Queens (with a stop in mighty Hamilton Ontario) played the Haunt before a small but super charged crowd of true believers in the power of rock ‘n’ roll.   Now look, as Gord Downie used to sing, “It Can’t Be Nashville Every Night” and I get that, but too cool for school Ithaca, the good “music town”  dropped the free-range kielbasa Friday night, and I don’t want to hear about the plethora of great shows you have coming to your town lately, I get that, I have been to my share, more than you, but if you guys can’t get a floor full of people at a great place like the Haunt, for living legends like the Fleshtones then you need to have a long talk with yourself.  If a bunch of middle aged guys from Syracuse can get down 81 to YOUR town to see America’s greatest party band during Halloween season, are you telling me you couldn’t find a few more? On a Friday night?  I refuse to believe it.

Ithaca, you have a good batting average for these kinds of things but you blew it on this one, and one “aw shit” will always erase 10 “attaboys”. That’s a mathematical fact, go get one of those Cornell types to do the proof for you, ya bastards.

The crowd that did show up, was eating it up and poured into the floor from the bar the minute things got started.

The party starts with the very first chord as the band marched on stage playing “The Dreg”, front man extraordinaire Peter Zaremba resplendent in black jacket and cape.  The steady beat provided by Bill Milhiser reminded us all that a band is only as good as it’s drummer with his rock solid percussion and backing vocals. Guitarist Keith Streng, he of the best high harmonies on this planet or any other, didn’t stop moving for one second during the just about 90 minute show and often in coordinated movement with bassist Ken Fox.  The Fleshtones, to a man, are showmen at their core.

The rock ‘n’ roll was relentless, as all rock “n” roll should be,  following “The Dreg” with “Girl from Baltimore”, “Back to School” and “Screaming Skull” , The Fleshtones blasted into songs from the entirety of  their still growing catalog of music with a bit of a tilt toward their Halloween party songs like “Haunted Hipster”.

The Fleshtones paid tribute to bands they came up with back in the day, back in the CBGB and Max’s days, with “Remember The Ramones” as well as making sure to give respect from the stage to Sesu Coleman who as in attendance, look that name up, he was there too.  It made me realize,  that from those days when Max’s and CB’s ruled the culture, The Fleshtones may well be the last men standing and they show no sign of slowing down.

For me, who grew up with this music and having seen the band multiple times, seeing The Fleshtones do what they do, is comforting. They are reliable, their performance ratifies what you knew all along to be true, that the Rock ‘n’ Roll party don’t stop, and everyone is invited and that three chords and a whole bunch of sha-la-la’s can make your feet move and your head bop.

I think the last time I saw The Fleshtones had to be in about 1985, when they played a bar up at Syracuse University called Sutter’s Mill & Mining Company and they opened up with the Stones’ classic “Get Off My Cloud”, on Friday they had another Jagger/Richards classic in the setlist, this time a deep track called “Child of the Moon” (!!!!)

90 minutes later when our heroes left the stage and the lights came up, you realize you had seen one of the best bands you could possibly see, America’s party band,  and in spite of the sparse but enthralled attendance The Fleshtones, as they always do, delivered. Too bad the same can’t be said for Ithaca.