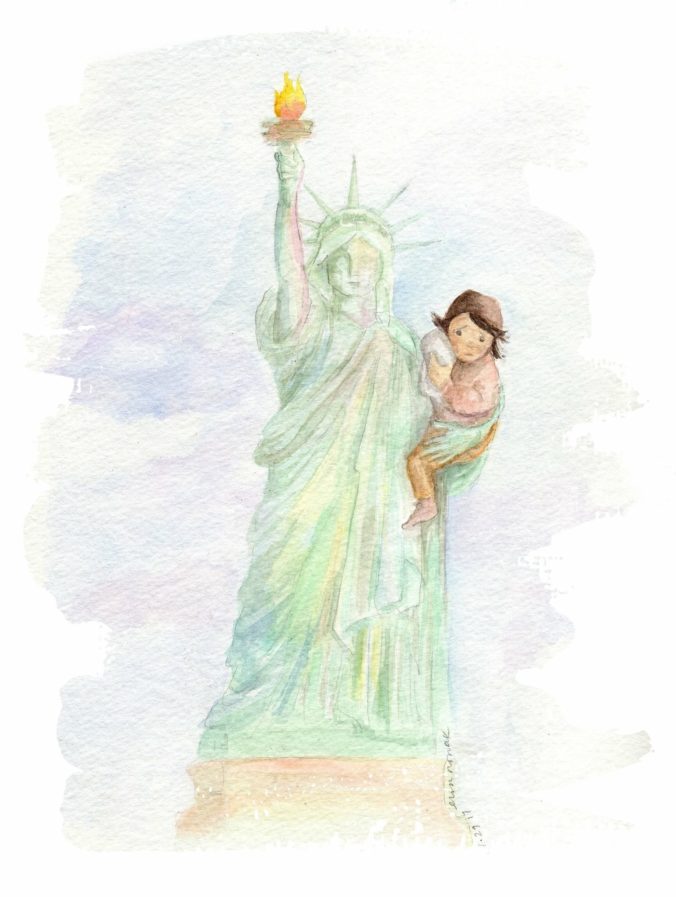 “What is this land America so many travel there

And we’ll make our home in the American land” – Springsteen

There is some amount of irony in this story, isn’t there.  A nation born of genocide and white supremacy calling it’s borders sovereign.

Maybe I have been mistaken all this time about America  and what this nation of immigrants stands for. It took 240 years to maybe, MAYBE try to come to grips with the atrocity of the conquest of this nation’s founding, and through our good intentions and our history of welcoming the strangers who land upon our shores looking for a better life, some how make up for our unforgivable past.   But it only took two years to piss that all away.

And the people we elected to protect our institutions and our good name, many of them professing to follow the biblical teaching of Jesus, stand and do nothing while a feeble minded vulgarian, playing to his racist followers, commits crimes against humanity in the name of America while his cowardly party, really more of a cult than a political party, stands by, occasionally wringing their hands and furrowing their brow and doing nothing

You will never again convince me that a Republican has anything to do with Christianity any more.  The tenants of one are simply not congruent with the tenants of the other regardless of how hard charlitans like Franklin Graham thump their bibles with their filthy hands.

Isn’t it interesting that the truly vile among us always come carrying the cross of Jesus if only to burn it.

We still have children separated from their parents months after a federal court judge ordered the Trump administration to return these kids to their parents.

And yesterday, people who traveled on foot to the border, some without even shoes on their feet, fleeing

drug gangs, fleeing oppression, traveling through dangerous and inhospitable terrain when at the gates of the so called “shining city on the hill” found them closed, and were greeted with teargas.  Women and children among them.

Most of us, ancestrally came from someplace else.  My family came from Ireland, and in many quarters of Protestant America, they  grabbed their bibles and posted signs on their businesses and said “No Irish Need Apply” making sure no filthy drunken papists would dare darken their doors looking for gainful employment in this new world. 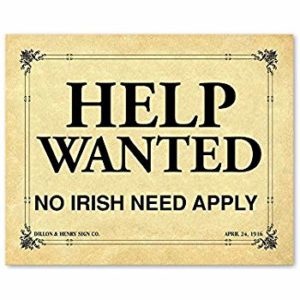 Racism and intolerance are as much a part of the American story as baseball and apple pie and I will admit, there were times I felt like we were maybe moving past it.   It was easy for me to think that, I am white.  When I get pulled over by a cop, I’m pretty sure I’m not going to get shot. Not every American can feel the same comfort and when those folks speak up and wonder why, they are told to shut up, the first amendment doesn’t apply to them any more than the second one does.

Wave your flag and sing your patriotic songs but you and I know the truth, It’s all bullshit.

But I know better days are coming, they have to be.  I know there are better people and more of the good ones than the bad ones.   I look at the incoming congressional class and I feel hope.

I look at my friends and neighbors who  are as disgusted as I am and I have hope.

I listen to the priest in the church I attend and realize the problem isn’t people of faith, just those who would turn faith into an obscenity.

I see that we still have the statue of liberty and I know that somewhere in this nation’s founding we had ideals that are counter to the ideology of an immoral president and his immoral party, who when they had a chance to stop these atrocities, will be remembered by history as cowards who rationalized kids being hurt for their good economy and their “conservative” rapist judges.  I hear their silence as the rationalize their disgustingly racist and credibly accused child molesting senate candidates.    You, the GOP, if you weren’t outwardly supportive, you were complicit by your silence.   You will have a lot to answer for.

I truly believe that most so-called Republicans will regain their sense of right and wrong, I know they are the lied to, and not the liars.  But it will be hard to trust their judgement for a good long time.

As in most troubled times, art is what reflects the true mood of the people.

The times seem to always deliver for us the art we need. 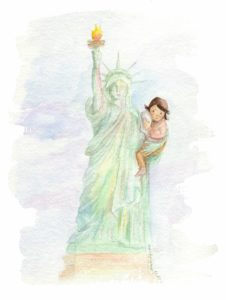 Artists like my friend Erin Nowak remind us that we do indeed stand for something, she took her heartbreak and outrage when Trump enacted his racist Muslim ban and turned it into art.  .   Erin’s work is a reminder of that.

Artists like  Maura Kennedy writing a song like  “Don’t Talk to Strangers” taking an incident that happened to her as a child and making at a parable for the current moment.   Another examples of good hearts using their art to remind us of who we are supposed to be

So no, I am not proud to be an American at this time in history, in fact I am horrified.   But I have hope.

I hope that we can once again soon live up to the words of the New Colossus, the Emma Lazarus poem inscribed at the base of Lady Liberty.

If we can’t we should box the whole statue up and send it back to France, we no longer deserve it.