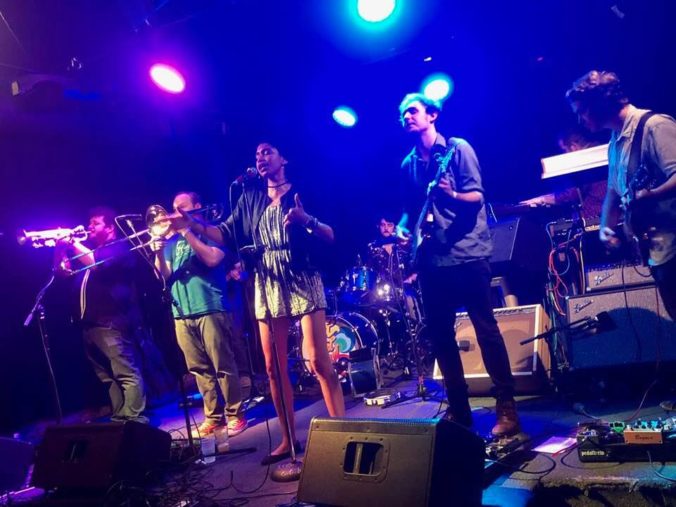 Years ago I fell in love with a band from England called Brand New Heavies, their debut album specifically.  I loved every song on it, a mix of funk, soul and a touch of jazz featuring a powerhouse of a vocalist named N’dea Davenport.  The album came out in 1991 and it’s still in my regular rotation.  If I had a top 10 albums list (I don’t) this would be on it and damn near the top.

Coming from my love of power-pop, new wave and punk rock a funky soul band with a horn section didn’t really fit the template, but I was never a template guy really, my ears were always looking for sounds to move though me and fill up my soul.  Brand New Heavies fit that bill to a tee.

As much as I looked, I never really found another band that had the same vibe as BNH did, sure there were some great funky soul outfits out there, but nothing felt as organic to me as BNH did.   I figured nobody ever would.

But music sure has a way of surprising you when least expect it to doesn’t it?

I found Hartford’s West End Blend because of Root Shock.   Like I’ve told you before in these often typo riddled pages, I came to Root Shock when I was looking for something specific, both musically and, in a way, spiritually.    When I discovered them and saw them play on a humid October evening to a packed house, I couldn’t help but wonder, how did I not know about this band before, and what else am I missing?

The story goes on and gets deeper, I wont bore you with all of that today, but one day I saw that West End Blend was playing at Funk n Waffles, I checked them out online and immediately realized that very much like Root Shock, WEB latched on to some portal to my soul and had a vibe very similar to BNH, at least to my ears.   I saw them at Funk that night and they became, immediately, one of my favorite bands.  I’ve seen them every time they’ve come through Syracuse except for one time when I couldn’t get out of my driveway and my snow blower was being an asshole.

West End Blend played last night, at Funk n Waffles to a disappointingly small, but overwhelmingly appreciative and dancing crowd and, as usual, they shook the rafters with their funky soul setlist.  Led by superstar vocalist Erica Bryan, the Blend doesn’t so much take the stage, as steam roll right over it, with a killer version of their song “Rewind”, this is the kind of song that lets you know what kind of show we are going to have, one where it is impossible to stay stationary for too long.  Driven by the horns of John Mundy and Mike Bafundo, this song will have you shaking your biscuits in no time and those biscuits were going to stay shaking  all night.

Among the many highlights was the single “Attitude” which on the CD is awesome enough, but in person this song is an incendiary device blowing up all over the room with funky solos and riffs from the two guitarists Jesse Combs on Fender, and Mike DiPanfilo on Gibson.  Attitude indeed.

Tom Sullivan on bass Sam Horan on drums lay down a massively solid back beat that keeps the funk rolling so the other players can do their things and keep the whole thing cohesive.  Paulie Philippone on keys is the wizard back there, West End Blend’s version of Bernie Worrell and every bit as good too.

The new songs were fantastic, Erica Bryan is a star up there, with vocal chops that are among the best I’ve heard and I’ve heard a few.  I was grateful that the poor house vocal mix got adjusted as the set got going because she’s s a vocal quality such that when people leave the show, THAT’s the thing they take back and tell folks about, that and her super cool stage presence.

Opening the show was maybe Syracuse’s best kept musical secret, Chris Eves & the New Normal who performed songs from their excellent debut album, last years “Find Your Way”. I keep reading that this band is a “jam band” so I guess I don’t know what a “jam band” is, because Chris Eves &the New Normal are a damn solid guitar based rock n roll band.  Featuring songs from that album in a 75 minute set that kicked off with the fantastic “Green & Blue” a song he wrote for his wife.  The band did pull out a great cover, a version of A-Ha’s iconic “take on me” was more fun than should be allowed by law.

The band is playing at the Westcott Street Festival on Sunday, 9/23 and I can’t wait to see them again.  Pick up their CD when you have a chance because it’s really an excellent piece of work.

It was a great show, I would have liked to see a few more folks in the room.  Music is conversation, the performers feed off the audience, and while the crowd was quite literally adoring, there really should have been more of them there.  Look, winter is coming, people are hard to get out when the snow has fallen with the temperature and streets are slippery.  I get that.  But right now, as we enter into the autumn months, there is nothing more enjoyable for me than to walk on cool nighttime streets into hot clubs to see talent like we get here.

If you weren’t there, you should have been.  I feel so lucky that I was.