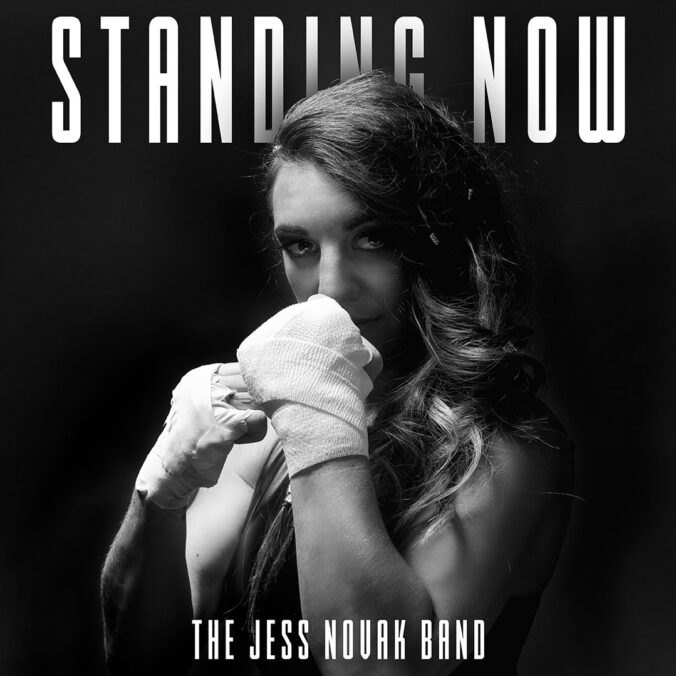 What did you do when adversity befell you?

Honestly, what did you do, how did you react?

I don’t ask to be judgmental, I go through my own gauntlet of emotions and reactions these days with  this rollercoaster ride none of us signed up for but everyone has a ticket to ride on.

It’s only human, and being human is the one thing we should all be focused on, especially now.

Adversity comes in many forms, a broken promise, a broken relationship, a broken society.

None of this is unusual, we all go through adversity.

I’m not telling you anything you don’t already know, but  as Longfellow said  (long before Ella sang it),  “into each life a little rain must fall.”

The next step is up to you.  What will you choose to do in the face of adversity?

I know how Jess Novak chooses to handle adversity, all you have to do is look at the cover of her new EP Standing Now recorded with the Jess Novak Band.

The cover, shot by Jessica Montgomery in stunning black &white, shows Novak, her long hair cascading over one shoulder, clear eyes locked in, focused, hands wrapped for combat in a classic boxers pose.   This shot tells you everything about the music inside.

Standing Now is about resilience.

Clocking in at just about 30 minutes over 6 incredibly well crafted songs that are parables to the human spirt, Standing Now may just be the message we need to take to heart in the current moment in history we all find ourselves in.  The kind of songs that start burrowing their way into your heart just before they get big and elevate your soul.

“News for You” comes on with a soulful Novak on piano taking the point of view of one in a bad relationship where one party is being taken for granted by the other, one where the offending partner is becoming meaner, abusive, dismissive.   The song moves from a lament to a rocking stomping declaration of self worth that playfully turns around a traditionally gender specific pejorative as if it were a weapon and turned it around on her oppressor. A romp of self identity punctuated by Nick Field’s horn accents and Anthony Saturno’s guitar virtuosity.

Speaking of burrowing it’s way into your soul, “Northern Lights” is a torchy, bluesy piano ballad about a love that shows some wear and tear, like any long term relationship might, and hoping to the heavens above that despite all fears she still shines like the aforementioned aurora.

“Match” is a funky as hell groove song that features Novak on a fiddle solo that shreds right next to Saturno’s guitar along with the world class rhythm section of Jabare McKinstry on bass, and both Byron Cage and Gavin George on drums. “Match” is four minutes of joy.

If you had told me that the uplifting and dramatic “Place of Solitude” was a Tony award winning song from a critically acclaimed Broadway show I would have believed you.  Featuring vocals by Anthony Saturno, it’s the kind of song you would have seen in a play where the handsome hero sings a message about finding one’s inner strength to the ready to give up femme fatale right before she goes out and defeats the villain and triumphs.    The kind of song that stops the show and rises the audience to it’s feet.  “Place of Solitude” is THAT kind of goosebump inducing song.  Novak’s fiddle adds an almost Celtic color to the soaring vocals.   Truly a show stopping piece of work.

For my money  Jess Novak is a musician that can hold her own with anyone you care to compare her to, and like any world class front person, she surrounds herself with other world class players.   The Jess Novak Band is a beast and Standing Now is an EP that will have you hungry for more. 6 songs just isn’t enough when it’s this good.

Resilience, empowerment, these are the characteristic of one who might be referred to as formidable.

Do NOT underestimate Jess Novak.

Because she’ll knock you down.

Find out where to get Standing Now here: https://www.jessrocknovak.com