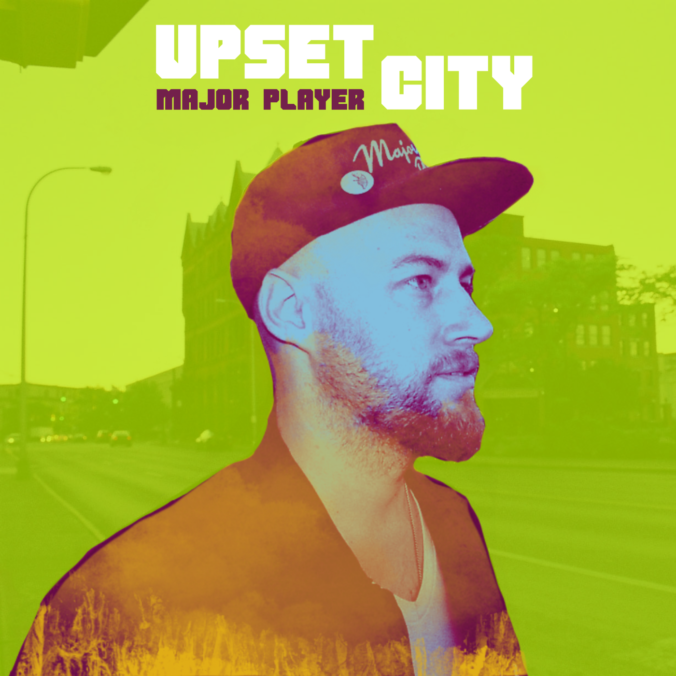 There have been bands in Syracuse music history that have had the chops to rise, with a little luck and the right breaks, to the “next level”.  The kind of music where when you heard it you were thinking, “these guys are going to be huge someday”.    Music that needs to be heard far and wide.  Music that when you hear it, you just know that they’re not long for the small clubs.

In this soon to be snow covered city, I’ve seen a few.

In the 315, names like The Flashcubes, 805, Screen Test, Masters of Reality all gave you the feeling that national recognition is on the horizon, whether it happened or not.  These were first string bands that were as good or better than a lot of music that’s floating around the culture.    Lately Root Shock absolutely fit that category and with the release of Upset City you can add Major Player to that list in big bold letters.

The brainchild of Jeffrey York, Major Player has been around for a few years now with a sound the has evolved from a chill-out, almost trip-hop groove into a radio ready Pop R&B sound with a good dose of neo-soul sensibility.     “We wanted to take that kind of dirty trip-hop vibe and bring it into a different space, more like an R&B disco kind of thing.” York said during a recent conversation I had with him about Upset City

I asked York about how that sound came about, “I wrote these songs with (collaborator) Andrew Greacen, we were pretty intentional, we wanted to write songs that were catchy and had good hooks, and that could be a three minute pop song.”

Starting with the hook and building upon that, York and Greacen can claim ‘mission accomplished’. Upset City is an album that doesn’t have a bad song, an awkward lyric, or a groove you cant move your body to on it.

Kicking off with  the current single “Bad Machine” an infectiously groove heavy song that shows off York’s world class pop sensibility coupled with an observational take on the current state of the world with it’s unchecked capitalism and consumerism.  In fact many of the songs on Upset City come from York’s observation of the world starting in 2016, when he and Greacen began writing. “everything that happened this year, aside from the pandemic I feel like happed into 2016,… everything  I wrote about was me interpreting the world over the past couple years.”

Nowhere is that concept more evident that with album highlight, the buoyantly soulful  “The Way”, a song that York calls “a direct call to action” with a simple message, a song about “getting along with people” in these days of so much strife.

York’s 90’s R&B meets neo-soul influences are on display with the smoothed out vibe of the introspective “Fortunate Situation” as well as the soaring “By Design”, two of those afforementioned radio ready songs .

Upset City is an album that is not just one of the year’s best local releases, it’s one of the best releases anywhere, it fits right in with some of the other great releases of the year with Pop R&B craftsmanship that will more than hold it’s own.

Music like this deserves as large an audience as it can get.

Visit Major Player on Facebook to find out where you can get Upset City for free. The album is also available on iTunes and Apple Music.