You can think differently.

It just takes the will to do so.  It takes getting out of the way of what you THINK you see, and seeing things for what they are, for what they have become.   Not what it used to be and is no longer.

It takes an open heart, but it doesn’t take much imagination, it’s all there in front of you.  You just have to allow yourself to see it.

I live in Syracuse. It’s not New York City or Boston.   It’s not Toronto or even Cleveland.

It’s Syracuse, one of the poorest cities in the country. A city that  for too long was the example of a fairly dormant, if not altogether dead rust belt city.    A city that people grew up in, only to leave it.

Think of a long ignored park, where weeds have taken over and nobody takes care of it anymore, you see these fields all the time and you drive right by them without giving them a moment’s notice.

Sometimes, people take over these neglected fields, they take care of the soil, plant seeds, and soon flowers grow and before you know it, the long neglected, weed filled lot is a thriving garden.

Syracuse is a thriving garden and what is saving this city is not politicians, not malls, not  factories.

It’s not the University, that’s for sure, they don’t know there is anything going on down the hill past the garish wall that is the route 81 aqueduct.

What is saving Syracuse  is art.

Painters, Photographers, Ceramicists, Musicians, Dancers, Sculptors, Illustrators, Writers, Fabric Artists, Rappers…It’s everywhere and it has created a vibrancy that is giving this city a pulse.   I know, I saw it last night in action.

“Last night?” I hear you asking.  “It was snowing like hell last night, who would go out on a night like  that?”

You’re looking at it all wrong.   You think of it as a barrier and I get that, but you can’t think of it as an excuse and then tell me there’s nothing going on in this town.  I will grant you that it can be a pain in the ass, but just as we are one of the poorest cities in the US, we are THE snowiest and everyone else should be jealous.

Because last night I went out to see life affirming, positivity enhancing music and it wasn’t in a frozen dying city.

It was in a dreamy snow globe.

I’ve told you  this story before so please forgive me if I repeat myself.

My first time seeing local music was on a night like last night.

The snow was coming down pretty heavily, as snow does in my may as well be Canadian city.  I had put on my heavy coat, gloves, boots and a scarf that would put the Bay City Rollers to shame.  I distinctly remember not wearing at hat because it would have messed up my slightly moussed up hair. (Which may explain my lack of ANY up there these days and the need for several hats.)

My friend Ed and I fueled with Pabst Blue Ribbon anti freeze hopped in the car and on frozen city streets we made our way up this little hole in the wall basement bar on Westcott St to see a band called Dress Code.  Don’t bother looking for the bar, it’s long gone now.

As we walked to the club from wherever we parked the car,  I remember being entirely enchanted by the way the light from the Westcott bars , shops and restaurants reflected on the pure white snow falling.

The band was great,  I remember the tiny venue being packed.  I realized that night that the only real way to see  music was in a small place where the room creates intimacy.

I remember standing in the snow between sets  smoking a joint with a cool chick in a long coat while she told me how she wanted to pay sax in a funky jazz band.

There was a community, a city was going on and the snow wasn’t stopping us, in fact the snow only served to enhance the experience.  It was, dare I say, insulating us up there on Westcott from the world around us.  It was magical, or at least to my young at the time mind it was.

I felt like I was lucky to be there.  It was a seminal moment in my life and it was all because in the snow and the cold of my flawed city, something in the universe helped me to see the world for what it was, to see it as beautiful because it was beautiful . It was magical.

Last night was the same kind of night weather wise.  The snow was coming down pretty good as I drove into downtown.  Once again I took the time to look at the color of the lights reflecting in the snow as I moved into Armory Square.  Getting out of my car, I looked around and while I do understand people’s trepidation on venturing out into the elements on nights like these, I couldn’t help but feel that feeling of being lucky to be there and just like that night on Westcott some thirty plus  years ago, I felt that dreamy snow globe feeling and it was hard to feel too cold in that warm blanket of white that cocoons my city.

Syracuse did not disappoint, if you walked by Funk n Waffles last night you would have found out that behind those fogged up windows there was a party going on as Syracuse’s best band had a surprise, pop up show in their favorite venue.  A venue that due to the size of their loyal local following they don’t get to play in very much these days. 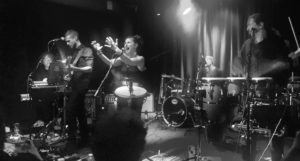 I know this blog from time to time is Root Shock heavy, but you have no idea what they mean to me.  Like I have said before I found them right when I needed the medicine they provide the most.  Feeling overwhelmed by the intense national negativity I was seeking out that soothing reggae vibe that Root Shock uses as the base of their own unique home cooking.   After that first night over a year ago I have not missed a local show, not one.  In that time I have gotten to know the band members and I can tell you they are to a person as genuine, gracious and generous as they appear to be on stage.  Every good thing that happens to them is deserved and they worked hard for it.

A mostly packed and from time to time raucous crowd watched Root Shock  at their best last night.  Two sets, and it seemed like they were playing with new energy.  In short they were like an explosion of good vibes up on that stage.  I am left with one question though, does Root Shock keyboardist Brian Lauri ever NOT smile?  We should all want to be like Brian.  You can tell when Brian is starting to groove when he can’t keep his ass on his bench during songs, there were some points where I was sure he was going to levitate off that stage and into the skies above Syracuse in a rapture of funky jam nirvana.

Bill Eppel was on fire, Syracuse’s answer to Robbie Shakespeare had it going on so much even his bandmates had to turn around and marvel.  Phil Grajko’s flawless tenor voice matched only by his guitar chops and occasionally whipping his arm in the air to encourage Brian to stretch out and lift off.

You can’t talk about this band though without talking about Jessica Brown and wondering if that powerful voice even needs amplification.  I can imagine when one sings some songs night after night one could lose a bit of the passion.  I can assure you this is  not the case with Jessica Brown, she lays her heart right out there and leaves nothing out.  One of the most passionate performers I have ever seen and I have seen a few.   Jocko and Tyre handling the beat that made the crowd dance.  It was a wonderful show.

But the guy I really want to talk about is guitarist Dan Valvassori.  This guy is an outstanding guitar player, his technique and tone has given Root Shock a unique voice as he fires off some of the nicest solos I have ever had the luck to witness.  He has decided to leave my favorite band, his life is headed in a different direction than touring life allows,  and I can tell you as a fan he will be missed by those of us grooving stage side.  I know Dan a little bit, we work in the same office building and I get to chat with him from time to time. I know how hard the decision was and I know how much he loves his bandmates.  I have to say to have such self knowledge to know when it’s time to go is a remarkably brave place to be and I admire him for that.  I can wait to hang with him at Root Shock shows in the future from the same side of the stage.  Dan is a good man and a man with a huge heart.

When the show was over, I ran out pretty quickly .  My 10 year old son likes it when all his “people” are home when he is sleeping and I promised him I’d head home quickly.  But not so quick that I didn’t take the time to reflect on what a magical night it was. I realized how lucky I was to be there, just like my first local show several decades past.   I couldn’t help but reflect that there I was, still grooving and finding happiness in the beat as the snow poured down making my city look peaceful and insulated from the world around us.

You can think differently.

In fact, sometimes, a dreamy snow globe  is pretty warm place to be.

Root Shock is playing another surprise show on Wednesday March 21 at 9:30.  I’m sorry but after all my talking up this band, if I don’t see you there I don’t know what else I can do.  You’re missing out.  Get your tickets here.

If you were already a subscriber you would already know why I have been so absent from my blog for so long.