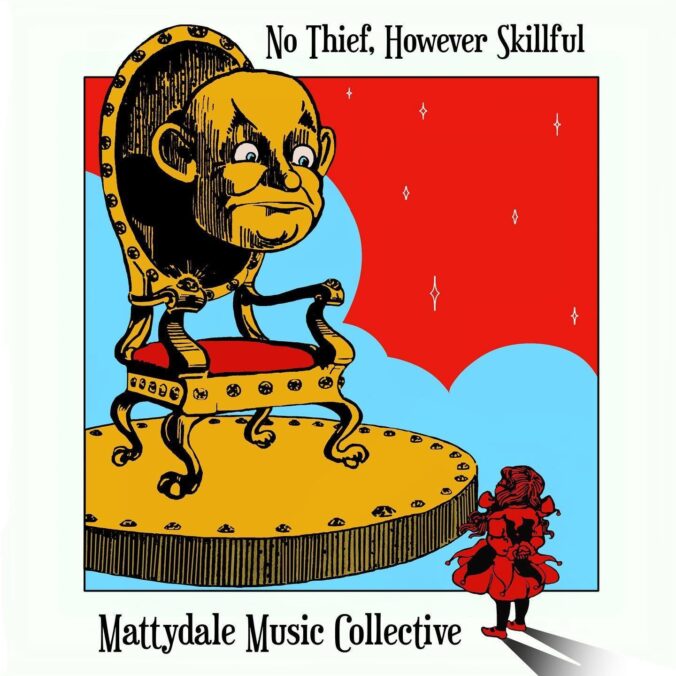 I like when an album really gets its hooks in to me, but I can’t pin it down, like it’s a moving target.

I like when the music is the sum of multiple influences and not simply derivative, where the music that informed the players is taken into one big melting pot and cooked on a slow flame that creates its own bouillabaisse, it’s own thing.

Say what you want about Mattydale Music Collective, one thing you can’t do is pin them down, and that’s a very good thing.   How good?   No Thief, However Skillful is the kind of music that should be getting played on modern music/alternative rock stations everywhere, that good.

Themes of darkness permeate this record without sounding like a downer.  That’s no mean lyrical feat, it’s subversive that way, songs you can groove to with a sing along chorus , that have lyrics of desperation, fear and resignation.

The album kicks off with “Broken Man”,  a ripping punk rocking  stomper worthy of CBGB’s on a Friday night about a man whose life isn’t quite working out and time is running out.  The song comes storming out of your speakers like a nihilistic freight train.

“Broken Man” is followed by the swampy lament of “When Love Goes Bad”, an almost country blues growler that sometimes reminds one of the darker Dream Syndicate, featuring angelic backing vocals by Ashley Rose & Hannah, which make Lee Knapp’s broken hearted, plaintive wail sound more bluesy.  Bluesy in the way that Iggy Pop can be bluesy.

Perhaps the most rock radio ready track is the single “Destination Unknown” a road song to oblivion that sounds like a psychedelic version of Stone Tempe Pilots with themes of tring to find one’s place in a world that is so disjointed and divisive.  In a right and just society this song would be on the radio everywhere.

“No Trace” is a brooding song about the effect of addiction on the one addicts loved ones, maybe a cautionary tale.

Despite the tales of darkness and human frailty, not everything is so dark, MMC end the album with a note of hope with the sweet, almost Celtic sounding “Father Time” which reminds us all, that no matter what befalls us as the world keeps turning,  we humans will persevere with kindness.

To a song, the lyrics on No Thief, However Skillful paint vivid pictures of their subjects, like three minute short stories.  The musicianship of  the collective, Lee Knapp (vocals), Anthony Kratz (bass),  Matt Poworoznek (guitar),  Sam Roux (drums) and Mat Wescott (guitar), along with producer Josh Coy (Long Since Forgotten, The Trend) create a sonic tableau that supports the picturesque lyrics with the creativity of a group that is not burdened by adherence to genre or rules, the collective is cohesive.

Why WOULDN’T you want me in your inbox?

Every few weeks I send out some extra content, mostly personal bloggy stuff and links to everything thats been published that month.

It’s a good deal for you