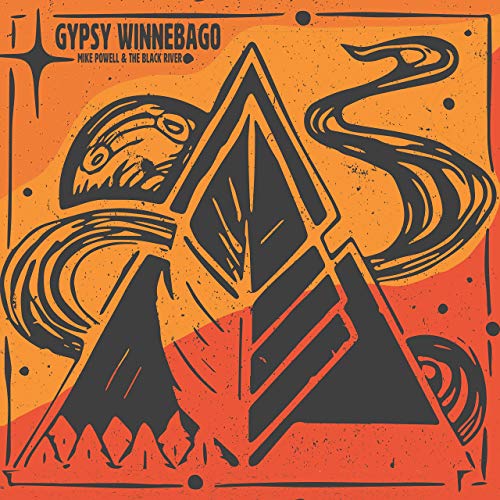 In the acclaimed documentary about The Eagles, the late Glenn Frey tells a story about when he lived in the same apartment building as Jackson Browne.  Browne was busy upstairs writing, and one day Frey could hear Browne at the piano hammering out the beginnings of “Doctor My Eyes”.  Browne would play it, over and over, stopping to have a cup of tea now and again, then back to work on the song.  All day long.  For days.

The lesson Frey took from it?  “So THAT’s how you do it.  Elbow grease.”

When you listen to Gypsy Winnebago, the fantastic new album by Mike Powell & The Black River you can hear the result of what happens when you intersect masterful song writing, world class musicianship and  hard work.   Even if you haven’t been there to witness this band put in the work, through a long standing gig at King of Clubs with their “Thursday Night Rock Show”, even if you haven’t seen them play every opening slot and festival gig they can get their hands on, you can hear the hard work in this amazing record. If you have seen the band play out, especially this past summer, some of these songs will be familiar to you, and if you loved hearing those songs as I do, you’re pretty happy to finally get to hear the recordings. To say they do not disappoint is an understatement.

I’ve heard The Black River referred to as a “blue eyed soul” band, and while I am not one for clichéd genre assignments in my music, singer and ringleader Mike Powell does have one of the best voices around, a voice Jakob Dylan would give up his birthright to have. A voice soulful in a Van Morrison kind of way.  (You know, back when Van would actually sing, not mumble so much.  Poor Van.)

Nowhere is that soulful voice on display better than on “Finer Things” a jumping barn burner of a track that is so upbeat and thrilling that it makes it hard to sit in ones seat.

The title track comes at you like a freight train with Powell’s vocals riding on the thumping bass and drums of Joe Bell and Dom Scicchitano as he tells a dark story of the nefarious doings of an irresistible woman in a border town.  A song you can close your eyes and picture the story vividly.  A trailer park film noir in 5 minutes.  Yeah, there may have been gunplay involved but you didn’t hear it from me.

Virtuoso keyboard wizard Brian Lauri, who evidently plays in almost every band in Syracuse, is maybe the only keyboard player who can in one minute sound like Garth Hudson and Rick Wakeman the next, takes this song into the cosmic stratosphere.

“CAW” is a playful back-country road trip song paying homage to the road life and, or course the three main ingredients of all good road trips, you will have to listen to the song to find out what that is.

Lead off track “Crumbling Stone” is a song that hits me right in my own personal spiritual wheel house about leaving it all behind to “grow inside”, a lesson that takes some people a lifetime to learn.  The song features some impeccable guitar work by Jon Hanus.

“Moonlight Sunshine & Rain” is such a wonderful, reassuring and uplifting, and yes, soulful song about the nature of life and it’s ups and downs that is told with such love and empathy that it could make you cry at it’s beauty.

The Black River will play their CD release party on Black Friday at King of Clubs at 406 South Clinton Street, Armory Square at 8PM ($10)

Special Shows – The Kennedys at the 443