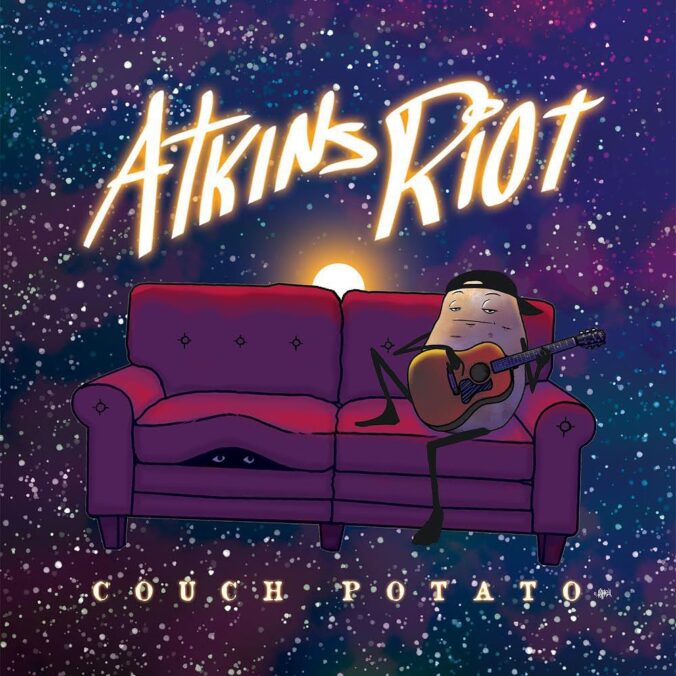 “In the pocket”. That’s what they call it.  It’s a term that originated with funk players as I understand it.  Being “in the pocket” is what happens when a player is in the groove of what the band is playing, when the player is hitting it just right.  It goes beyond mere competency with the instrument, or being technically good. It’s like the groove goes to another level.  It’s an intangible, you can’t easily describe it, but you know it when you hear it.

On the new EP Couch Potato by Atkins Riot, you hear a band where all players are “in the pocket”, and you can hear it on every track of this excellent new EP by long time Syracuse music scene stalwarts.

The title track, starts off with a spacy jazz guitar riff that morphs into a Phish worthy groove courtesy of guitar virtuoso and possessor of his own IMDB page,  Anthony Saturno. Spiced up with a taste of vibraphone and  theremin to add a absolutely delightful bit of melody and otherworldly texture to the laid back groove.     Right away you can pick up on how intertwined the members of Atkins Riot are in creating a sound doesn’t so much pump from your speakers, but rather flows like a rhythmic river and keeps you grooving along in your seat.

Bass player Sam Roux gets a Claypoolesque workout on the rocking Staggered Ladders, a song that starts out rocking and only picks up steam as it gets rolling into a fantastic Saturno guitar solo which explodes back into the rolling chorus with only the anchor of Rob Zaccaria’s drums holding the whole thing together for dear life.  Outstanding Track.  Try driving slow when this one is playing.

Closing out the set is the cinematically dreamy “Amongst The Stars” a song that starts out as a sort of a ballad featuring a duet between vocals and guitar, while Byron Cage’s brush work on the snare teases up to a swelling crescendo that will put the hair on the back of your neck standing at attention.

Atkins Riot is the kind of rock n roll we need right now as we look forward to being able to see music like this in it’s element, performed live, on a hot summer night when the people crammed inside a venue are making the walls sweat and you curse that you will pay for forgetting ear plugs the next morning.  You want to feel it in your heart with each snare crash or bass riff, you want to soar with the guitar solo and share that experience with other people.

From misty dreamscapes of soaring beyond the ordinary, to the funky grooves of songs about getting out of the house, on Couch Potato Atkins Riot gets in the pocket and stays there, and takes you with them for the ride.  But like I said..watch the speed ..rock n roll can do that to ya…

The very next thing I write is for the mail list. I’m going to lay out my future plans here, tell some stories of my decent into madness and how I came out smelling like a rose.

I will also have some stats for you, kind of the neilsen ratings for blogs, and I’ll tell you all what I learned about my mail list skills.

You won’t want to miss it, so subscribe..you’ll only see it in the mail …