Sorry I have neglected you guys yet again.  This time I have an excuse, I have been busy working as the promotions guy for a VERY cool art festival that takes place IN my neighborhood.   I can’t tell you how rewarding it is for me personally to be involved in such a great thing.  Plus if you don’t know my neighborhood, you have no idea.  It’s something very special, it really is.    Anyway, between that and having to take classes related to the day job I’ve been busy, and I’ve neglected you.  I’ll make it up to you.  I promise.

Look, I don’t write reviews here.  Who am I to judge someone else’s art?  I only know what resonates with me, and if something doesn’t resonate with me, maybe it does for you. Maybe I’m just not the intended audience for that particular work.  Doesn’t give me license to slam it, like so many reviewers tend to do especially out here on the interwebs .

Besides, in these increasingly dark times, especially here in America, if someone wants to sing a song and do a dance, I see that as a good thing.  I gave up judging many lents ago.

I am not an expert in music, other than as  an avid listener, I don’t play, I can’t sing, ask me to and you’ll quickly regret it.  But I am an expert in my own story so please know, that what I write here is my honest reflection of someone else’s work.

I love music, art, movies, books all of it.  I love what I listen to and when I am lucky enough to get to know the makers of these things that move me, I love them too.(just ask Root Shock)  I am too old to wear my heart anywhere but on my sleeve.  So no, this isn’t a review.  Like I said, that’s not my place.  This is a reflection on a wonderful album made by two wonderful people.

But this presents a problem.

It’s going to be hard for me to write this essay without you, dear reader, thinking I’ve resorted to kiss-assery, or maybe that that Pete and Maura paid me to write this.  Be forewarned, I am about to heap lavish praise on this collection, because I love every single note on it. 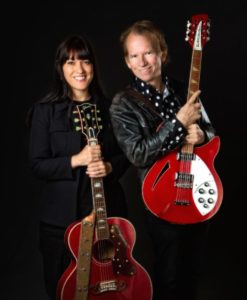 Pete and Maura Kennedy  are troubadours in the best sense of the word, a married couple so perfectly attuned that when you meet them you think to yourself “these two are supposed to be together” that’s the vibe they give on stage and off.  Over the course of their career they must have traveled “a half a million miles” three times over by now, and at each stop, they pick up something wonderful and weave it into the beautiful tapestry that only their unique and specific alchemy can weave.

When I listen to “Safe Until Tomorrow”, The Kennedy’s 15th album, I am transported with them on their traveling musical journey .  I am a willing passenger along for the ride around America.  I am in Greenwich Village one minute, Laurel Canyon the next, with a stop on the way  in Austin to put cayenne in my coffee.

But these are dark times in the good old USA right now, and it would be wrong to simply ignore that for the sake of a good time, and the Kennedy’s don’t, they address our country’s problems directly, but with their poetry and without being heavy handed, or preachy.  Like all good troubadours, their music reflects the world around them, and like the people I am lucky enough to know them to be, they do it with unquenchable hope and my God, isn’t HOPE what fuels all other action?  Isn’t hope exactly what we need right now?

Safe Until Tomorrow is Pete and Maura’s best album and that is no mean feat.  I have heard them all and they don’t have a single one that isn’t worth owning.   Sirius radio subscribers will recall their hosting the wonderful  and lamented folk music weekly The Dharma Café (If I ever open my own coffee shop, that’s the name I’m using).  I recall listening and discovering what a great story teller and collector of tales Pete is.  But, as usual, I digress.

Not a bad track on this, here are some thoughts on just a couple of them.

The lead single and video, “Safe Until Tomorrow” is a beautiful, heartfelt piece of pop perfection.  Those of us who have been called upon to be caregivers to elders will know the feeling of knowing or perhaps praying that everything will work out If we can just keep our loved one “Safe Until Tomorrow”, if we can just get past one more day. When we humans have to face the idea that our loved ones who are getting older and facing mortality, we are always bargining for that one more day, just keep her safe until tomorrow.   If you haven’t been there you will.   The tone Pete gets out of his guitar on this track is particularly tasty to me.    A track about aging that for my money can stand right up there with Elvis Costello’s “Veronica”

I became aware of “Don’t Talk to Strangers” when the Kennedys debuted it on a radio appearance they did about a year ago.  Maura wrote the song in response to the current American president’s racist Muslim ban which included in it’s scope, Syrian refugees.  The song, which juxtaposes an event in Maura’s childhood and having to depend on the human kindness of strangers with the plight of people coming to America desperate for a better life and the promise of lady liberty.  Little did anyone know, although we all should have known, that the same president would orchestrate a substantially worse atrocity a year later, making “Don’t Talk To Strangers” as sadly poingient and neccesary as it was when it was first written.

“Be Silent No More”, featuring lyrics by poet and novelist BD Love is an instant classic, a call to arms as it were in the current moment, reminding us to stand up, take to the streets and yell in the face of injustice or abuse of power be it sexual or political.

“Be Silent No More” dovetails so nicely into the next track “Is Anybody Listening”, for me this is a march of hope(there’s that word again) stomping into the face of so much injustice. Lyrically it reflects back to many days of the past two years where we have seen so much trouble in this nation, so much evil to be quite honest and you wonder if you’re going crazy, am  I alone in this?   A stomp of unity with a rousing choir the punctuation.  Inspiring  and uplifting.

The final track is a tonic for the spirit, a cover of the classic “Midnight Train To Georgia’.  When Maura Kennedy was a child of only 4, she told her mother that she wanted to be a Pip, as in the backup crew for the incredible Gladys Knight. It was her first ambition.  Her mom listed all the reasons why she couldn’t be.  But thanks to studio techknology, not only is Maura handling the Gladys part of the song, but also of ALL the Pips!   A perfect closer to a magnificent album.  I hope when they recorded it, Maura did all the Pip’s dance moves.  Something tells me she just might have.  Finally a Pip after all these years!  I defy you not to sing along.

A midnight train to Georgia with Pete and Maura is the perfect end to a perfect trip around America.  Any good tour of America has to stop at at  least one national monument or treasure and Gladys Knight is every bit of that.  I remember thinking as I listened, “well in spite of everything we have going crazy in this world, we still have Gladys Knight.”

I could write something about every track on this album, it’s that good, but you would get bored with my rantings quickly and give up on me.  It’s ok,  I know it.  But I also know you get the picture here.  Safe Until Tomorrow is a terrific CD.    Pete Kennedy is nothing short of a virtuoso on guitar and as perfectly matched with Maura’s sweet and clear voice as they are perfectly matched in life.

You can pick up your copy in a few places besides all the streamers.  Remember the streamers (Spotity, Apple streaming) pay the artists fractions of a cent per play.  If you want to support these artists, pick up the CD at the shows or get a copy from Amazon or something.

The Silent Nightingale – A reflection