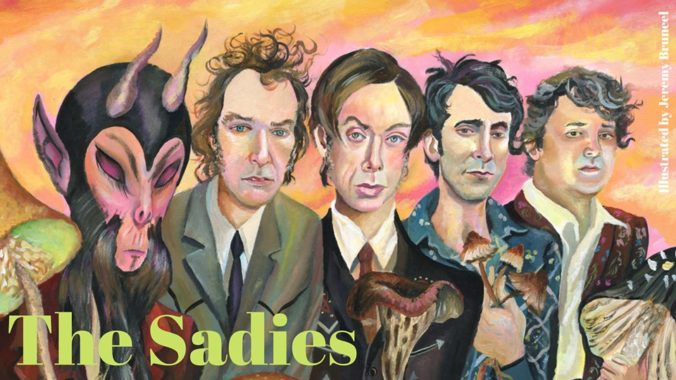 You don’t get to be “of a certain age” without learning a thing or two in this life.

You know, the lessons that the world teaches you, truths that come with life experience.

Call them guiding principles, if you will.

-Don’t take your snow brush out of your car until at least May Day.

-Always be nice to people.

-Hold the door for folks.

And maybe chiefly among these truths, is …

Don’t stay home when the Sadies are in town.  Just don’t.

The fact that I was even able to buy a ticket four days before the event is baffling to me.

The last time The Sadies came to town I was feeling terrible.  I was sick.  I had a cough, I was exhausted.  Runny damn nose, all of it.

I never once considered staying home.  That would have been a stupid thing to do.

Of course, to anyone who DID attend that show last winter and ended up with the FLU, I’m sorry, it couldn’t be helped.

You know that thing where you’re out of town and you try to find out what restaurant all the chefs in town eat at?

The Sadies are the band that other musicians stop what they’re doing to go see, and in attendance last night at King of Clubs were members of bands that  I truly  love in this town, Harmonic Dirt, Modafferi, 1.4.5(!!!!)

And good god was last night good.  A band with twenty plus years of road behind them, a catalog of songs that run the gamut from twangy country (good country, not ..y’know..the other kind), to psychedelic, to rockabilly, to straight up rockers and none of those words mean a damn thing, none of those labels, genre definitions, all meaningless.  This is a band that you have to see live to fully understand.  Truly, even listening to the records, which are fantastic, doesn’t scratch the surface of how incredible a Sadies live show is. There is nothing else like it and I say that without a hint of exaggeration.

The Toronto band has made a name for themselves with some killer collaborations too,  folks like Neko Case, Gord Downie, John Doe and Kurt Vile have all recorded with the band.  They have played to sold out audiences around the world and are considered a national treasure in Canada.  But like the beloved Tragically Hip, they kind of play to “those in the know” down here in States, and those who know in Syracuse packed into the tiny Clinton St club last night and got themselves quite a treat.

The first set opened with “Lay Down Your Arms” sounding like Ennio Morricone on acid, the four piece ripped through that gem and about 16 other songs including the barn burner Pretty Polly featuring guitarist Travis Good on fiddle.  Travis Good plays like a man possessed, almost angry, like that pretty Gretsch guitar has talked shit about him or something and maybe it has.  There is an otherworldliness to the spirtits conjured by The Sadies when they are on stage.

The Sadies are the only band I know that can rave up on a cover like “Loved On Look” an Elvis Presley song that the Sadies play like the king was abducted by space aliens and came back to earth as Sky Saxon, and 10 minutes later play a Ramones cover like “Questioningly” and have it all make perfect sense in the context of our tour through the Sadies catalog, and that was just the FIRST set.

A jam packed 45 minutes later and set one was over, primary vocalist and pretty much the charming  front man for the group, Dallas Good announced the break to get some air. “but don’t worry, we will be back soon for more of our nonsense”

The second set kicked of with their traditional opening troika of “The First Five Minutes”, “Cheat” and “So Much Blood”.   I have to tell you, if you are not in awe by the end of those three songs, you need to get yourself checked, son.  You ‘aint right!

Enough can’t be said of the rhythm section of Sean Dean on stand up bass, and Mike Belitsky on drums, these guys are top notch in the back and it’s almost like they keep the Good brothers from floating completely away on the Sadies unique mix of country reels and psychedelic jams.

By my count the evening consisted of almost 45 songs, every one of them mind blowing.

Tonight they will be opening for Jason Isbell & The 400 Unit at the legendary Capitol Theater in Port Chester New York, and I do think that those who are there are going to be wishing that opening set was longer.

It’s a nice room for The Sadies to be playing in, but they’ve played in a lot of rooms around the world but I think they like playing at King of Clubs, it’s their 4th time playing the venue.  The crowd is super into it, the room is kind of dank, a little hot.   It’s like a dive bar with a kick ass PA.

I think I saw Travis Good even crack a smile once or twice.

Have I gushed enough about what seeing this live show is all about?  Do you get it now?

I said earlier that to not be at the show, when The Sadies are in town, is a mistake, it may be even a character flaw.

If you ask any one of the lucky people who were stage side last night at King of Clubs if they were going to be there the next time The Sadies come to town, I’ll bet you every one of them would tell you they will be.

The Sadies are one of the best live bands I have ever seen, and I’ve seen my share.

Header image by the great Jeremy Bruneel – used with permission