Punk became a circus didn’t it? Everybody got it wrong. The message was supposed to be: Don’t follow us, do what you want! – Johnny Rotten.

The flame that lit a million punk rock fires and I think even Johnny may have gotten it wrong judging by that quote.

Here we are 41 years later and some of you may not have heard this album, shame on you if that’s true, but even if you haven’t you HAVE felt it’s reverberations because this thing shook the world on it’s axis.

It wasn’t the first punk rock record, but it was the most iconic.

One album and it represents the ENTIRETY of recorded output from the Sex Pistols and was enough to merit their induction into the Rock n Roll Hall of Fame. (The validity of such a hall is a debate for another time.)

This was THE seminal album of the original punk rock era.

It was by far the most significant album of my life because of where it led me and it came out when I was 12 years old.

12 years old,  I was a gangly, awkward pre-teen just starting to fall in love with music and popular culture.  My entre to rock n roll , along with a local album rock radio station, was  through comedy.  Saturday Night Live, in the 70’s was about as rock n roll as it gets in terms of breaking new ground in terms of form, content and respect for rock music.   I saved my allowance to purchase music featured on this show quite often.  I became a big fan of artists such as Paul Simon, Bonnie Raitt, any Beatle, The Stones.

The radio was introducing my young ears to prog rock like Yes and Genesis.

I loved all that stuff and I still do to a great extent, but little did I know how my life was going to change.

My buddy from school, Joey, loved rock n roll too.  He was the first metal head I ever met, he loved AC/DC , Judas Priest and the Scorpions which I of course liked as well. Joey had a brother who we all thought was the coolest guy in Baldwinsville.   Joey’s brother was a Bowie fan and introduced us to the thin white duke and we would dive in to his recorded catalog like hungry pit bulls.

One day Joey came by and handed me a LP with a ugly pink cover and cut out lettering that looked like a ransom note..

This being the musical equivalent of “This milk tastes sour to me, you taste it!”  Of course my music hungry mind didn’t care, I was so desperate for the opportunity to hear new sounds, and curious as to what was so offensive  to these guys sensibilities.  What could it possible be to elicit that kind of a response from a fan of The Scorpions for godssakes?

I  grabbed it and I recall looking at this thing for along time before I put it on the turntable.

I had already amassed a fairly decent record collection for a 12 year old, but nothing I had in my collection looked like THIS.  I didn’t even know what “Bollocks” were!

My only exposure to punk at that time was a brief network news report about this movement in England called “Punk Rock”. Me being something of an Anglophile and a music obsessive(in case you hadn’t noticed.) I was definitely interested but the report was so brief it was hard to get a feeling for what it was all about other than fashion.  I didn’t get a flavor for the music, nor the social issues that gave rise to British Punk.

I did know, or at least I thought I knew what rock music sounded like.  In 1977 a lot of the music was fairly high concept.  Bowie was doing so many dramatic and theatrical things with sound. So many of the bands of the day that the other kids were listening to were highly produced, and almost orchestral like Queen, Pink Floyd or The Moody Blues.  Even Led Zepplin would bring in some English pretense to their thunder. Everything was so complex and layered.

The other half of the musical zeitgeist at the time in this country were bands like The Doobie Brothers, or The Eagles, some of that Laurel Canyon scene that was so laid back it was almost sleeping.

That was the music of the time.  So glossy, so maybe over produced.  So professionally presented.  It was all overflowing with talent but there was no real edge to it, no danger.

Then I  put Never Mind the Bollocks on the turntable.

My God, it was like a bomb going off.

Nothing has been the same since. 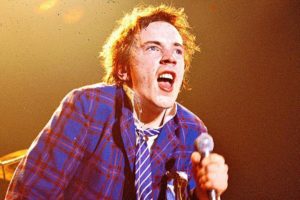 In 40 glorious minutes I went from “Slip Sliding Away” with Paul Simon to “Fuck this and fuck that!” with Johnny Rotten

The album is like an out of control flame thrower blasting anger and rage in all directions.

Starting off with the staccato sounds of marching boots to kick off Holidays in the Sun I had never heard anything like this before in my life.

Rock music was so complicated before, so grand in scope and execution.  I can’t say I didn’t enjoy some of it but there was no fire, not for me anyway. Not until this.  THIS was a snarling, surly affront to everything  in the culture including Rock n Roll itself.  “Anarchy in the UK! ” “God Save the Queen!  She ‘aint no human being!”  (Yeah, that was kind of harsh, but you know..’77….you just had to be there, but I digress.)

MAYBE three chords, lyrics delivered with such venom, you could hear the snarl on Johnny’s face in the grooves of the record.

Even at such a young age I knew this was the real deal. I could feel the energy pulse through me.  I played the album again and again. I don’t think it left my turntable for weeks.

As a 12 year old, of course I couldn’t understand all the issues surrounding the rise of Punk in England, I could hear the anger, the rage and I looked forward to getting older and having my own anger and rage!   (I was a weird kid.)

The local mall wasn’t too far from my home so I would walk the few blocks and head straight for the bookstore, a chain called The Paperback Booksmith and grab up as many books related to punk rock as I could. This was my primary education. There was one simply called “PUNK” and it was lettered just like the cover of “Never Mind The Bollocks”, in it I learned not only about UK bands of the era, like Generation X, The Clash, The Slits and the Damned  but also about US bands like The Ramones, Teenage Jesus and the Jerks, Television, Blondie and Talking Heads.  I scooped up albums from every one of those groups and more.  It was a glorious time to be a kid just getting into music.

The thing was, every one of those bands I mentioned sounded unique. The Punk Rock movement of the day, the spirit of ’77, wasn’t about carbon copies, it was about making your own sound.  Making it from the ground up, without pretense and without rules.  Creativity was everywhere.    Not just in music, but in fashion, and in books.  Nothing was sacred anymore and it never should have been anyway.  While there were punk rock albums released before this one, namely by The Damned and The Ramones, none shook the foundations of the culture like this one. It opened up the whole world to a new way of thinking, especially to a 12 year old awkward  boy stuck in the suburbs looking for something, anything to light a spark.

The whole world opened up for me.  Nothing was impossible.

It will be forever one of life’s great ironies that an album that yelled about NO FUTURE was one the opened the future up for everyone, created a movement and like a brilliant flash across the sky burned away into the night, but not before a million more misfit kids just like me heard  it and created our own revolutions. 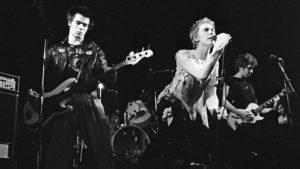