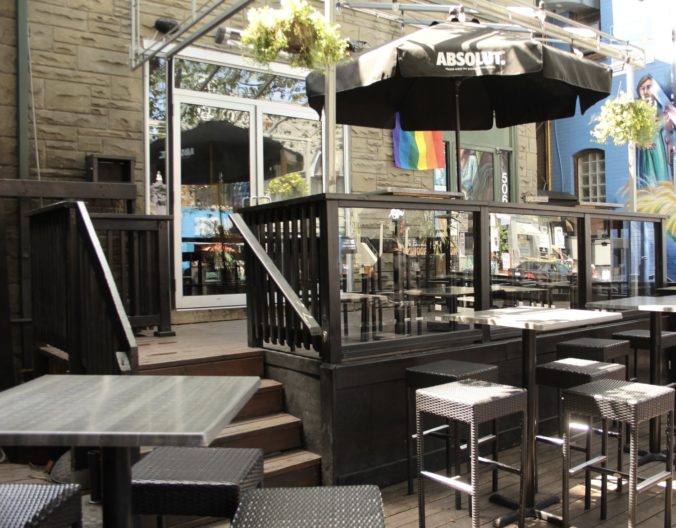 “Only good things I hope!” Javad said, and immediately felt regret at employing the tritest of conversational cliché.

He was nervous, visibly nervous, his hand trembled slightly as he shook the larger mans hand.  Paul Valentine was a good ten years older and a foot taller it seemed.  Javad thought, this guy is what they were thinking of when they came up with the term “bear” he’s a big round hairy mountain with killer blue eyes.

“Please sit down, sit down” Paul motioned to the opposite bench in the booth as the waiter came over.

“Javad you have GOT to try the Frozen Raspberry Lemonade they have here. It’s great, full of vodka and it will knock you on your ass before you know what hit you.”

The waiter scurried off to fetch the two drinks.

“I’m sorry I’m so late!  Did you have to wait long?”  Javad had arrived about 20 minutes later than the set up time, and this meeting was a set up indeed.  Paul was a good friend of Thommie, one of Javad’s neighbors at his Roncesvallesapartment building.  Thommie likes to be one of those well meaning but irritating straight people that think if one is gay, one will be immediately be interested in seeing one of his other gay friends socially just by virtue of sharing the same sexual preference.    Javad always thought It’s the same as saying…”Oh you’re straight!  You should meet Jenny!  She’s straight too!”  Like the gay community was one homogenous sexual pool just waiting for the right straight person to plug in the pieces, so to speak.  His heart was in the right place but Thommie always pissed Javad off .

Javad wasn’t sure why he agreed to meet Paul, he was never one for older men and even less interested in hook ups.

“No, not long at all, 20 minutes tops” Paul said with a smile that Javad noticed was one of the warmest smiles he had ever seen.  Behind the beard, Javad found Paul to be a pretty good looking guy.  Very masculine, he looked like a more chiseled, darker James Gandolfini

“What’s with all the cops all over the place?”  Javad had noticed the cop cars when he got off at the College subway station and even more so as he approached Church.

“All I know is what I heard on the radio during cab ride downtown.  Evidently that body they found in the alley near Bloor is somehow being tied to three other murders over three years in the gay village. We may have a serial killer on hour hands down here I guess”

“I don’t buy it, aren’t serial killers supposed to be more prolific or something?  One a year is not serial, maybe he should be called an occasional killer, or whimsy killer, one murder a year isn’t even worth a TV movie about it.  You know what I mean?  This is one lazy serial killer”

The men laughed, the inappropriate conversation being staged just blocks away from tragedy was breaking the ice in a “guy” way.

“No, man, once a year or so is perfect for a serial killer!  You know, cold, calculating, when the time is right, whatever other twisted criteria these guys have, they STRIKE, only to lurk back in the dark for the next time.  You have the serial killer discipline mixed up with a mass murderer.  Totally different skill set.“

“RIGHT like they have in the states when a dude goes apeshit with a gun on some college campus.”

“A lot of rules this murder business.”

“A lot of categories.”

“What was Bernardo then?”

“He was just a sicko, couple of victims, all for kicks.”

The drinks flowed at a moderate pace,  Javad was really enjoying Paul’s company, but wasn’t entirely sure another date was in order.

“Paul, you’re are a hair stylist?”

“Yeah I work at Sparkle over in Yorkville, you know the drill, high end, high profile, full service spa.”

Even Paul knew about Sparkle, owner Kevin Barton was Toronto’s most famous stylist and built a pretty successful business doing all the salon work for TV people and almost every big time photo shoot in town.  Sparkle pretty much shuts down to any other business during the film festival every fall as they take care of Hollywood elite.

“It’s ok, I rent a chair, I make good money, and I love my clients, I have a good base that followed me from other places and I’ve been able to grow that following.  It’s kind of fun working at a place that’s so high profile but I’m not sure I’m a such a high profile kind of guy.  Anyway, the owner, Kevin, I’m not so sure about Kevin, he keeps making comments about selling, which isn’t necessarily a bad thing, you know?  But I am a bit cautious that if there is a new owner, it’s a good new owner, not just some asshole with money.  But none of that is in my control so what can I do about it?

“Why would he want to sell it?”

“He keeps saying things like ‘I’m an artist I didn’t get into this to be an employer’, makes me nervous, you know, it’s my work place.”

“It’s not just that, he’s a draw, he’s achieved a level of celebrity in town that I benefit from. When they can’t book him, sometimes they book me, and I get to go with him to lots of cool stuff. ” Paul said,  “But he’s not taking care of things he should be, he’s letting things slip that he shouldn’t because they don’t yet affect the bottom line.”

“Well we don’t have a computer.  Most salons have a computer to keep the schedule and to record client preferences, that part is key.  That’s how you know what the color mix is for a given client.  He keeps the schedule in a book and uses something called ‘color cards’ for each client, and he guards that like you wouldn’t believe. “