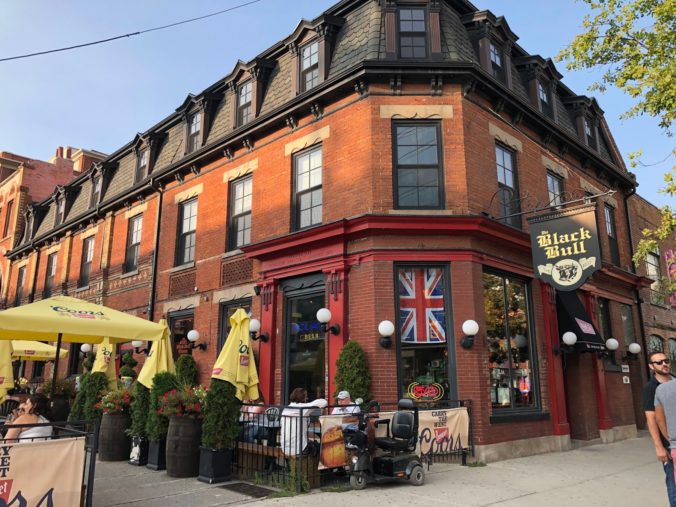 Foreward: I have been messing with this fictional stuff for years. Got discouraged, put it away, got better at some aspects of writing, messed with the fiction again. SO here is what I’m doing. This blog is mostly music, but in order to exercise my fiction muscles I’m dusting off some old chapters and writing a scene/chapter a week and plopping it here in between the music. Hope you enjoy it. Chapter two next week.

Robyn Taylor was slowly becoming inebriated on the increasingly crowded patio at The Black Bull, one of the city’s longest running and most popular watering holes, where she was currently sharing a large table closest to the street with Adele Livingston.

After every three or four sips of her vodka tonic, Robyn would perk up, and lock eyes with Adele, and proclaim, with great wisdom and increasingly productive salivary activity; “God girlfriend , “It’s your life!  Live it!” After the first few drinks Robyn was sitting up straight in her chair, her tall frame and long brown hair giving her a statuesque appearance, almost towering over the more petite Adele.  After her reaffirming proclamation, Robyn would continue her slouch.

The two colleagues and friends had left work at Datascape, a heavily funded data services firm with an overpriced suite of offices just north of Eglenton, just after lunch where Adele had confided to Robyn that she and Darius, her boyfriend of three years, had broken up.  A break up that Adele had not only seen coming but was actually relieved it had happened, and she was glad she didn’t have to be the one to pull the trigger. The breakup was over a week ago, it only occurred to her to let Robyn know today.

“You know, I’m not sure Darius and I breaking up was that much of a bad thing really, we weren’t getting along all that well lately.  I’m really okay with all of this Robyn.  I’m actually kind of relived.” Adele had given up the vodka tonics for ginger ale about an hour prior.

“Is anyone else from the office coming? You mentioned you e-mailed Sarah, Javad, and Carrie to meet us? “ Adele was grateful for Robyn’s support, whether she needed support or not.

It was patio season in downtown Toronto, late spring.  Not too hot yet, the sky clear above the busy streets. Robyn gave a long look to the tall punk rock looking dude  on his bike turning onto Soho Street before returning her attention to her heart broken friend.

The sound system on the patio started to play the 80’s chestnut  “Caribbean Queen” by Billy Ocean.

“OH SHIT Adele!  This is it! This is for you!!  You’re Jamaican right?  Caribbean Queen!! Now we’re living the same genes, beans I don’t know what the fucking words are…”   This is your song girlfriend. Forget about that guy!  Your life!! Live it!! Whooooo!  He’s an ASSHOLE”

“Well she got some of the words right’ Adele thought

The waitress came back to check on the two of them.

“Can I tell you something?  Wush your name?””

“Stephanie, your hair is fucking HOT….HOT!   I love it.  You’re beautiful!”

Stephanie looked at Adele “can I get you guys another?”

Adele smiled a sweet smile “I ‘d like another Ginger Ale and FYI, she’s not driving, or walking evidently.  She’s ok, I’ll take care of her”

“Vodka Tonic but only one more, I don’t want to overdo it” Slurred Robyn, oblivious to the fact that  “overdo it” had come and gone about an hour ago.

Adele was relieved to see the familiar, sober for the moment faces of Sarah and Carrie enter the patio area and head for the table.

“Hi Guys! You made it!” Adele said with a mixture of delight and relief.

“No kidding,” said Carrie with a smirk “asshole Scott called a meeting at 5 O’clock, some staff were conspicuous by their absence and names were mentioned specifically, just a heads up guys.”

“And oh by the way, since when doesn’t the Queen streetcar stop right here at the corner?  How many billion for fancy new streetcars and then they don’t stop anywhere anymore….What the hell happened to her?” Sarah asked, noting Robyn’s advanced and rapidly deteriorating condition.

“She’s cheering me up”

“I was pretty cheery to start with but her heart is in the right place.”

“Hope the right place isn’t anywhere close to her liver.”

“We snuck out of work like  around 1 and came right here, Robyn’s been on the V & T train ever since, drinking like a Cossack.”

Robyn has started to nod.

“She not long for this night from the looks of her” Sarah was looking concerned.

“I’m okay!” yelled Robyn in the midst of a drunken head bob, before gravity won the battle.

“Ill pour her into an Uber soon, “ Adele volunteered, smiling.  “After all she got hammered like this to cheer me up.”

“How sweet of her, what’s this about a break up Adele?  You ok?”  Carrie asked as she moved her chair over between Adele and the increasingly listless Robyn.

“I’m fine, It was a week ago.  I had honest to God kind of not even thought about it until I mentioned it to Robyn in passing after the production meeting. “

“Who broke up with whom?”  Sarah wanted to know.  This was now an interrogation.

“Adele it matters.  Did he cheat on you?!”  Carrie shot back.

“No!  So why does it matter who pulled the trigger?”

“It just does. Guys have man law, we have girl law and girl law prevails over man law, and in girl law it’s important to know who broke up with who because if he broke your heart and broke up with you first then he’s a bastard and fuck him. Trust me on this, I was pre-law in college.” Carrie was on an evangelical roll. Sarah was nodding in agreement.   Robyn was just nodding.

“But we all know him and he’s a friend of all of us right?  You know what, it wasn’t working out anyway,  and I don’t want this to become a ‘thing”.  It’s no big deal.  Where’s Javad, I thought he said he was coming?”

“He broke up with you, clearly”

“Then he’s an asshole, case closed.  Javad got a booty call from his new boytoy and wont be joining us yucky girls, some alpha bear stylist named Paul from someplace near Church and Wellesley, go figure, our little boy was getting all dolled up for advanced sodomy studies.”

They all giggled, even Robyn who was perking up.

“Darius is not an asshole, he’s not.  This thing was on shaky ground anyway.  We didn’t agree on anything, we fought too much.  The writing was on the wall really.  It wasn’t a matter of who broke up with who, it’s a matter of timing. Had he not pulled the trigger I would have eventually.   So I’m totally ok, I am.  This is a good thing.“

Sarah was not convinced.  “No, you’re not.  You have psychic damage, you’re just too traumatized to know it you need support, Robyn is right. We need vodka tonics..  Where is that waitress with the pink hair?”

Adele was desperate to change the subject.  When Darius took her to dinner the night it all became official, they met at the Irish Embassy Pub on Bay, in retrospect she was pretty sure he picked it because it was the noisiest restaurant he could think of, just in case she broke down, or yelled at him, or begged for him to reconsider.  Anything to prevent a scene, which is why Darius invoked the words of breakup weakness; “I think we should take a break”, which is cowardly guy-speak for “lets break up”

When Adele heard the words, there was a brief tinge of sadness; Darius is a nice guy, but no bitterness, no anger.  There was relief.    When she got to her apartment that evening, after what ended up being a very nice dinner, she put on the TV and hung out like nothing ever happened.  Adele was going to be okay.

Stephanie brought a round of drinks to the table and with a smile placed a large iced tea in front of Robyn.

Image of The Black Bull by Teena in Toronto