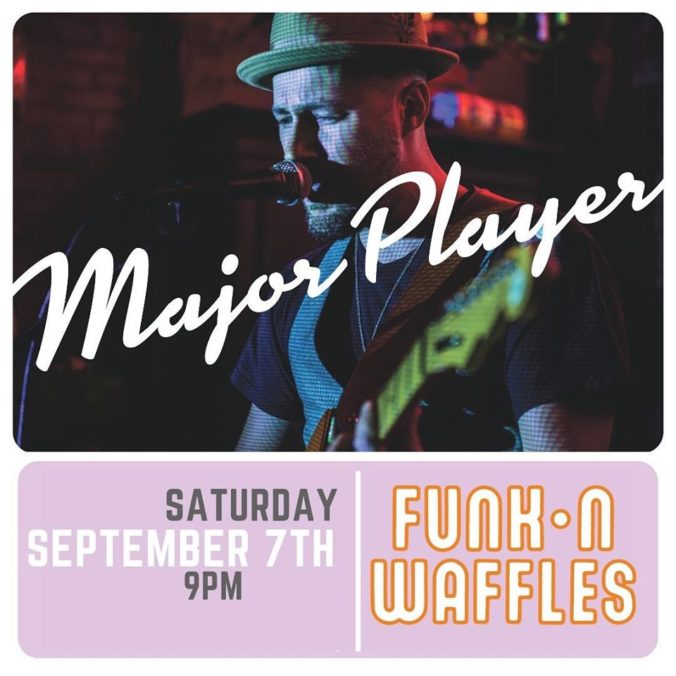 Have you ever been in a place where so much great music is being played for you that you can hardly believe it’s real?

Have you ever felt like you needed to pinch yourself?

I have, last night, at Funk ‘n’ Waffles.

I’ve felt that feeling more often than not while within the walls of the beloved waffle shop that serves as the musical heart of a city.  But last night was one of those “next level” nights and even though the turn out was decent on an evening with so much going on in town, I still had to look around because I couldn’t understand why people weren’t pounding down the doors to get inside.   Every group of musicians that took that stage was that good, delivering sets of unique, original music. Everything a music obsessive like myself would be looking for.

To be honest I knew that last night would be special.  I tried to talk up the show to my music loving friends, telling them how good this one was going to be.   As I walked the couple blocks from where I parked my car to the venue,  I got energy from the people walking between stops,  past busy restaurants, crowded bars, and retail storefronts.  Spill over from the Irish festival in Clinton Square making the busy sidewalks busier and the cooling night air made me realize that as much I was going to miss summer, autumn in Syracuse is not without it’s charm.  It’s a blessing to see that and know that the passing of time comes with gifts along the way.

Speaking of gifts, to be able to walk alone into a music venue and be immediately part of a gathered community is like magic to me, it feeds my soul, and it’s why I do this.  It’s why I sit here pounding coffee, writing these essays.  I can’t sing, I can’t play, this is how I try to contribute and hopefully someone will read it and want to be part of the gathered crowd, getting that emotional high that can only be gotten from live music as it pulses through you and makes you move.

We were there to see Major Player.  Jeffrey York’s beyond amazing vision of perfectly crafted neo-soul, delivered with York’s crystal clear tenor voice and backed by a group of collaborators uniquely suited to advancing that vision.

Major Player’s 2016 debut has been in heavy rotation for me since I first heard it.  I was lucky enough to see them open for Root Shock not too long ago and was all fired up to finally be able to see them headline a show of their own.  Like I said, I’ve been talking this one up big time.

They did not disappoint, these guys play a kind of music I tend to gravitate to quite often these days, the kind of music you can hear on that legendary taste making station KCRW, (Someone get these guy’s music to Anne Litt!)  a chilled out, soulful groove that still delivers a rocking punch.

Setting the tone with the excellent  “Grift and Gum” got the crowd moving with a hypnotic sway, the band played (I think) most of that first album as well as damn near show stopping version of their current single, the ode to summer “Game Time”, a song that should be blasting from your car audio system as summer gives way to fall.  Look, any band that can credibly cover both Portishead and David Bowie is one well worth your time don’t you think?

Along with York were bandmates Brent Spreter on bass, Stephen Collie on drums, and Ian Doherty on keys.  It seems that Spreter and Collie are leaving Major Player, life is life right? I get it.  But it’s too bad because that rhythm section is dead on, they will have left some big, groovy shoes to fill.

If this was our last chance to see Major Player in this configuration, that made the show all the more special.

As if that wasn’t entertainment enough for your ten measly bucks, opening were Lowlight from  Asbury Park NJ, and Syracuse’s own Nate Glyn.

Lowlight were a revelation.  They call what they do “Roadhouse Chic” and I think that pretty much clocks it, credible and soulful with a rootsy sound around some of the most clever lyrics you’ve ever heard.  Playing a set that was way too short,, frontperson Renee Maskin remarked how much they enjoyed playing in Syracuse for an audience that paid attention and was engaged with the performance.  That’s a tribute to YOU, Salt City, it’s a tribute to the music scene we have here.

Lowlight has traveled everywhere, including stints opening for The Pretenders(speaking of strong, ass kicking front women), I sure hope their travels bring them back here for another chance to hear them soon.

Nate Glyn and his band the Sweet Sours delivered his infectious blend of heart on his sleeve indie pop like a post modern Jonathan Richman. He is deserving of all the buzz that he’s generating in local circles and in local media.  He’s working on a new LP and I for one can’t wait to hear it. Every song he and his top notch backing band played sounds like a potential radio ready hit to me.  You’ll be hearing from this guy.

Walking back to my car, the bars were starting to spill out their patrons looking for last call change of scenery, the revelry of the Irish Festival having moved into a soon to be sleepy Armory Square I thought about how lucky I was, to have gotten to see so many great, talented artists on one stage, for almost nothing, and in the middle of my city.    It was made even cooler when I was able to hang with two of my favorite neighbors also there to hear this fantastic show.

As summer does indeed start to come to it’s closing days, and the chilly winds of winter threaten, but never succeed to drive us all indoors, let’s remember, that there is a world going on, and a community out there. I saw so many smiling faces last night that if you could harness that light you could brighten the fall skies and make it summer all over again.

The best music events are the ones where you think you couldn’t imagine being anywhere else or even entertain the notion of leaving early. Last night was one of those nights. The next one might be right around the corner, we just have to make that turn.