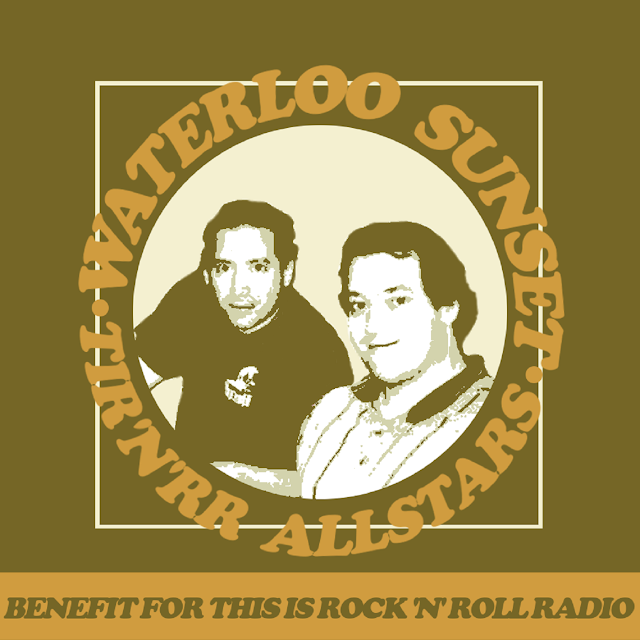 Do you remember lying in bed,

with the covers pulled up over your head,

radio playing so no one could see?

Joey Ramone knew what he was talking about.

Joey’s words resonated with so many kids like me. Kids that had a romanticized view of the world on the other side of the lights and dials of my little Realistic™ bedside clock radio with the time displayed on little flaps of black tabs with white numerals which would softly click each passing minute as the number displayed would change. LED clocks?  Away with your newfangled voodoo!  Doesn’t that shit give off gamma rays that fry your brain or make you sterile or something?  I’ll keep that barely perceptible but comforting click as time passes through the night, like an audible sentinel,  a soft horn cutting the fog of night guiding me to the morning sun.

It was a nightly ritual, using that backlit analog tuner, dialing in my favorite station passing the static, passing the occasional nearby station playing country music or preaching the word of Jayyyyysus, battling the frustration of getting the damn thing on the frequency just right  and the sweet payoff of  hearing glorious rock ‘n’ roll music in beautiful mono from a two inch speaker.  Knowing that somewhere in my city, in a tiny brick building surrounded by antennas, sits a guy in a small dimly room,  with shelves of records surrounding him, a phone blinking with the incoming calls of music obsessives like me and two turntables and a microphone .

A kindred spirit sitting alone in the dark night of the quiet city, a true believer in the power of rock ‘n’ roll. A “free form” DJ, the earliest of all cultural influencers. Lee Abrams hadn’t yet gummed up the works with his market research and theories on rotation and marketing.  You couldn’t just fire up Spotify and click to hear your favorite song of the moment, you had wait, it took patience.  You had to be at the radio and ready for it.  You had to listen for it.  Immediate gratification wasn’t a thing yet.  You had to earn it and because of that it meant more, you did the work, you put in the time.

Marconi, bless his heart, created just as vital a rock ‘n’ roll instrument as the guitar, bass and drums.

It’s  a world that, for the most part, has been, if not lost entirely  to corporate broadcasting conglomerates, has definitely changed.  In some ways I would argue things have changed for the better.  I am a big believer in the promise of the internet being able to bridge miles that radio waves could never do.  But we have lost quite a bit too.

Curated Spotify playlists from self proclaimed “musical influencers” can never emulate that personal connection between the DJ and the listener, the community (mine are cool though). The emotional impact of music selected by someone who knows his or her listeners and knows what a kick ass segue sounds like (a lost art), can never be replaced by Pandora algorithms predicting your taste, as if that were even possible. The music, the sound, requires something intangible, it requires heart, it requires soul, and no computer can reproduce that.

We are pretty lucky here in Syracuse, we still have true believers in our community, believers in the sound of the radio.

We have the great Dave Frisina, a man who knows his community and with his online stream at TheRebelRocks.com he continues the tradition he started just after his graduation from Cortland when the Long Island kid drove up to Syracuse and planted roots, raised a family and provided the soundtrack of a city for decades.  A soundtrack that took local music with the same importance as the bigger acts.  He did it while at the same time being one of the nicest guys ever.  Rebel Radio sounds like Syracuse.

And while we are in the subject of true believers, we also have Ronnie Dark, Mike Adams and his cohorts on The Wax Museum with Ronnie Dark. Ronnie is an honest to goodness rock ‘n’ roll star in my book, and you can hear these guys every Sunday night from 7pm-10pm (EST)  on WVOA 87.7 FM    Specializing in vinyl, if you seen any of these guys picking up 12 and 7 inch gems at your local used record store or flea market, you can bet your going to hear those goodies on Sunday night.

But today, however, I am here to evangelize two other true believers and two of the nicest guys I know.

If you are looking for that that pure power pop/new wave/punk rock three chord goodness, look no further than This is Rock ‘n’ Roll Radio with Dana Bonn and Carl Cafarelli on the mighty Spark Syracuse from 9-12 PM every Sunday night.

Lou (SU) Reed once said “One chord is fine. Two chords is pushing it. Three chords and you’re into jazz.” Dana and Carl take that as gospel as they feature great rock ‘n’ roll from John Lennon to Johnny Rotten and everything in between and everything since.   If it’s rocking, if your head is bopping, and you are hearing that power popping, sock hopping, punk rocking, nuggets dropping rock ‘n’ roll fury, you are in the right place.  You are going to hear everything from the Beatles to the Sex Pistols, from the Flashcubes to the Bay City Rollers.  From the British Invasion to the New Wave and local heroes like Harmonic Dirt, one of my favorite bands who had the most played song on the show last year with the fantastic “Maybe”.

But it’s not only that, these guys and their appreciation of the art of songcraft can get you to listen to a song you may have glossed over for whatever reason, one such example for me, was “Only Yesterday” by The Carpenters.  Yes, The Carpenters.  Look, forget the over the top, 1970’s lush over production, the song is fantastic.  Karen’s vocals are breathtaking and knowing the sadness of her life and tragedy of her death, well its just brings one to tears. I never would have given the song another, considered chance were it not for Dana and Carl.  That speaks to more than just being fellow fans of great song writing.  It speaks to their credibility to encourage you to listen with new ears.

I will say, however, that they didn’t get me to see the power pop bona fides of the Styx song, “Lorelai” as much as I tried to hear it, but that’s not Dana or Carl’s fault.  I think I have an allergic reaction to Dennis DeYoung’s voice. Dennis, If you are reading this don’t feel bad, I have the same reaction to Roger Hodgson.

In addition to the shimmering and shaking rock perfection on the airwaves and over the Internet every Sunday, the lads have crated a wonderful community of fellow aficionados who check in with one another every Sunday on Facebook.  See? Facebook can be a force of good!

And it is definitely not just blasts from the pasts on the playlist, there are just as many, if not more, songs by current pop craftspeople that fit that tradition to a tee, songs and artists that I would never had been exposed to were it not for the mission carried out by these guys.

The thing is, Spark Syracuse is a non-profit, grass roots, community arts and media organization.  Resources can be hard to come by.   To say that they run on a shoe-string budget is to wildly over state the value shoe strings.  I suspect Dana and Carl would love to have some shoe strings.    Unless I am remembering things wrong, in the past they have had to consider postponing a live show due to a leaky roof.   The computer that runs the streams is getting old and needs replacing.   To get by they need a little help from their friends.

As karma would have it, some of the artists frequently featured on This is Rock ‘n’ Roll Radio have stepped up and released a fantastic compilation called   “Waterloo Sunset – A Benefit for This is Rock ‘n’ Roll Radio” .  The title track, a benefit collaboration that would kick Sir Bob Geldof’s group of big haired do-gooders right in their bums, is of course a cover of The Kinks idyllic “Waterloo Sunset” and if any song can be said to be beautiful, this track surely is.  But that’s not all, you also get 12 more previously unreleased tracks  by the participants.   Every one of these songs is wonderful, and makes damn fine late summer driving music. I know, I’ve road tested it.

Look, it’s ten bucks and you are supporting a good cause.  You spend more than that on coffee half the time.

It can be purchased from Futureman records here, and the proceeds are to support the cause.  Old school and prefer a CD to digital? Kool Kat Records has you covered here.

Let’s pitch in and get the guys some shoe strings.

They call the show, “the best three hours of music on the whole friggin planet” and like the Clash before them, who called themselves “the only band that matters” it is, of course, a bit of tongue in cheek sloganeering, but they aren’t wrong.

I do remember lying in bed with the covers pulled up over my head, listening to the radio.  These days I’m more likely to be chilling on my porch on Sunday evenings with overpriced earbuds inserted but the feeling is the same.  They are still out there, in small studios, they are the DJs and they’ve got believers.

Prolific I am not. But you could sign up to get an e-mail when I let it fly? No spam, no sale…I’m not selling anything. It’s just between you and I.