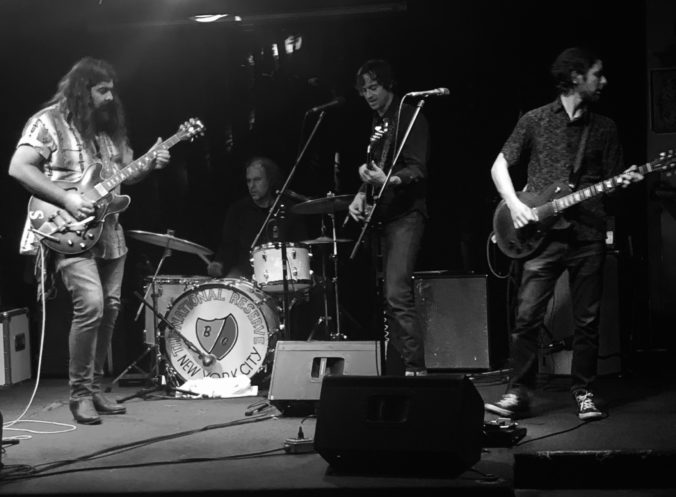 I was never one for labels, applied to people or music.

Roots rock?   Fine.   Alt-Country?  Ok.  Americana?  Sure, I guess it’s all better than lumping it all in with the unfortunate label of “country” music.  I like country music just fine, as long as the country in question is Columbia, those guys know how to lay it down,  make it sexy and would never be caught dead with a backward ball cap on. Ok, Im being snarky but some guy from Long Island once said “it’s still rock ‘n’ roll to me.”   He had a point.

I hear the phrase “Bar Band” thrown around quite often like it’s a bad thing. Those people have no clue.

Some of the best shows I’ve seen, and I’ll bet I’ve seen more than most, have been in sticky-floored tap rooms and small clubs, in fact I’ll take those nights over almost any big hockey rink band playing today.

And therein lies the problem, my job in these pages is to describe music, but how do I do that and not fall into the trap of just throwing meaningless labels around?

Leave it to an Irishman to go straight to emotion.

And maybe only for the space  of one three minute song, it should change you, it should inhabit your soul.

The one thing all good music has got to have, is soul.

The National Reserve, who played an absolute ripper of a set last night Funk ‘n’ Waffles, that those in attendance will soon forget, have soul in spades.

These guys from NYC have indeed cut their teeth on weekly residencies at Brooklyn shot and a beer joints for years, and their latest album Motel La Grange is full of Stonesy riffs, New Orleans pianos, and the kind of singing that is at one minute rockingly bluesy and  heartbreakingly soulful the next.  You can’t do that without heart.

The minute the band starts to play you know you’re in for something special.

Ripping into a set that featured songs from their entire catalog, some new songs(Laurel Canyon), and a few well placed covers by the likes of Willie Nelson (You Look Like the Devil),  Ronnie Lane (Roll On Babe).

The title track off the aforementioned album , a song about lost love,  is the kind of song that is so devastatingly sorrowful that it may well be best appreciated, sitting alone a your favorite dive bar looking through a glass filled with two fingers of your favorite amber hued strong water as last call approaches, not wanting to go home to your empty house.

A song like New Love is one of those straight ahead bangers that reaches anthem level jubilation in your heart.  Songs like that make you wanna stay out too late, tip over the table and go home with the waitress.

Closing with perhaps their best known song, “California” The National Reserve left nothing on the bench playing it with its amazing harmonies and twin slide guitar riffs.  Front man Sean Walsh even broke his guitar strap playing it.  You know it’s a banger when a guy breaks a guitar strap.

The Brooklyn band also features Jon LaDeau, himself a fantastic lead guitarist and vocalist, rock solid bassist Matthew Stoulil and drummer Brian Geltner who can play with a light touch when needed and with thunder when required all while never losing a beat

This is one solid rock ‘n’ roll band that will be one that I make a point to see whenever they come through these parts.

Opening this show was one of my favorite locally sourced bands, Harmonic Dirt.  I’ve been telling anyone who would listen that Mike Gridley has one of the sweetest voices you ever heard and is a damn fine picker up there, Susan Coleman on bass writes some of the best lyrics you’re ever going to hear for Mike to write music around.  Banjo man Taylor Bucci  was unable to be there and I did miss the wonderful harmony vocals that Taylor sings with Mike(you have to hear these harmonies…honest to god), but  Bob Gaus filled in quite well, his perfectly jangly guitar accents coupled with veteran drummer James DaRin playing on a bigger kit than usual gave the band a different,  larger sound than usual that was a treat to hear

I see Harmonic Dirt every chance I can (and so should you), it’s hard to pick a favorite from last night’s performance but suffice it to say, their hit single “Maybe” is always a favorite. (“Maybe” was 2018’s most played song on Spark Syracuse’s Sunday night must listen “This is Rock ‘n’ Roll Radio with Dana & Carl”) .  I am absolutely LOVING the new songs.  “Halifax Hurricane”  warms my, at one time Canada inhabiting heart.

When I close my eyes I can see in my mind, Harmonic Dirt playing around a campfire on some lakeside beach somewhere, passing the guitar around now and again.  They have a new album in the works and judging by the new songs they’ve been playing, it will be every bit as good as their debut “Anthracite”.

They pulled out a version of New Speedway Boogie in memory of Robert Hunter who had died earlier that day, that was absolutely incendiary.

You need to check them out when you can, you never know where they might turn up, but you really should consider seeing them at the Brewerton Center for The Arts on October 18th.

Not bad for a Tuesday huh?

Another special night of music.

I’m telling you, this town is popping but we have GOT to find away to bring more people to the table.

Outside The Canon – The Velvet Underground’s “Squeeze”